Winning 35-7, the TFS defense held Bremen to only one touchdown in the first quarter — the only one they’d score all game. With the victory over the conference rivals, TF South football moves to 2-1 on the season and 1-0 in conference play.

Before the game started, a TF South student reminded the hundreds of fans present of the 20-year anniversary of 9/11. A moment of silence was observed for the lives lost during the tragic event, and players knelt on the field. After the moment of silence, the TF South choir sang the National Anthem.

The game opened with a disappointing drive for TFS, one in which they quickly fumbled the ball, giving Bremen possession.

With only 17 seconds left in an otherwise scoreless first quarter, TFS senior Ethan Pryor caught a 4-yard pass from senior quarterback Jacob Urdiales to draw first blood in the contest, giving TFS the lead 7-0 after a successful PAT from senior Ivan Villalobos.

Right after the start of the second quarter, Bremen ran the ball 55-yards for a touchdown, tying the game 7-7.

With three-and-a-half minutes remaining in the half, TFS senior Ernest Temple weaved his way through the defense for an 11-yard touchdown run (video below). The halftime score was 14-7.

TFS head coach Bob Padjen said the team made some adjustments at halftime.

“We were allowing them to get outside of us on defense,” he said. “And on offense we just went to the basics and a lot of play-action passing. … We would key in on Ernest and then we’d have the quarterback run a little bit.”

With three minutes left in the third, TFS scored on a 1-yard pass from Urdiales to Pryor, giving them a 21-7 lead.

Senior Willie Roberts came up big for TFS throughout the game, especially when he scored on a 60-yard reception from Urdiales in the third. The play increased the margin to 28-7 after the successful PAT.

The final score of the game was a 7-yard run from Temple in the fourth quarter, which, after the fifth consecutive successful PAT for Villalobos, gave TFS the victory with a final score of 35-7.

Both senior Jacob Urdiales and junior Jerell Madison played quarterback during the game, with Urdiales doing much of the throwing and Madison doing more running.

Udriales notched 181 passing yards on 12/15 completions with one interception.

When asked about stand-out players during the game, Coach Padjen was quick to point to senior Willie Roberts, who gathered 129 reception yards.

“He’s got great hands, he plays both ways. He’s a cornerback on defense and he broke up about four passes on defense. And [on offense] he caught some great passes on key third downs, one on fourth down. He was definitely a thrill to watch,” Padjen said of Roberts.

Temple ran the ball for 119 yards, supplying most of the team’s 192 total rushing yards. Combined rushing and passing yards (after penalties) added up to 321 for TFS.

As the gap in the score increased, Padjen said he was able to get most of his athletes some playing time in the game.

Next week for TF South Football

Next Friday, TF South travels to Tinley Park High School to take on the Titans. The game is scheduled to start at 7 p.m.

“Tinley Park beat [TF] North this week. Tinley’s got a good offense, we know that. We hope to be able to put some points on them. We’re multi-faceted on offense so we hope to be pretty difficult to stop,” Padjen said. 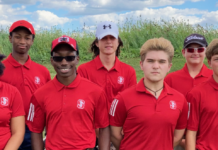