Publisher’s note: This letter was written in 2001, just five days after four planes were used as weapons against American civilians on September 11. “At the time, I was just starting my fifth year in education and my first year as a Dean of Students,” says Ken Reynolds. “Writing helped me gather and organize my thoughts and feelings after the tragedy.” The Lansing Journal asked Reynolds if we could publish the letter as a Local Voices piece in observance of the 20th anniversary of that attack, and he agreed.

An open letter to the students of TF South

Like all of you, I am struggling to come to terms with what happened on September 11th. Never in my lifetime has anything like this occurred. I have nothing to compare it to, nothing to help me determine how or what I am supposed to feel after a single event of such horrifying death, destruction, and despair. Then something entered my mind that allowed me to think of a way this applies to this school that I care so much about.

Many of the students in this building, both past and present, have asked numerous times why we have to take all these classes to graduate. The familiar cry of, “What does this have to do with the real world or my life?” has fallen from the mouths of most of you reading this letter right now. After experiencing an event that none of us should ever forget, answers to why we take all these classes were played out on the real life stages of New York, Washington, and Pennsylvania. Real life and education go hand in hand. Consider the following courses:


I know that I have missed some classes and connections, but that’s OK. My main goal was to convince you that your education DOES relate to the world around you. This one horrific event ties together so much of what you study. Our country needs you to enroll in these classes, learn as much as you can, and then go forth to college or into the world to make it a better place.

One last thing: Go home tonight and look up the word HERO in a dictionary. Memorize the definition, and then decide if it applies more closely to movie stars, athletes, and musicians, or if it more accurately describes the brave men and women who protect and serve our country. Amid all the chaos of that tragic day, all the people running away from those twin towers in New York, there were firefighters and rescue personnel going in to the same buildings that everybody else was running away from. Heroes are not created in movies, in games, or at concerts. Instead, they are made in life and death situations.

That’s just one of the things I have learned since September 11. I will never again view my life in the same way I did before this tragedy. Unfortunately, that is one real-life lesson that high school could not offer me.

“I am attaching a picture taken the morning of the attack, approximately 30 minutes before the first plane hit the North Tower. As fate would have it, that Tuesday morning was the first day of pre-school for my son Louis. My daughter Cori had just started kindergarten the week before. As many parents now do, my wife and I catalogued our children’s first day of school each year. After the attack happened, we completely forgot about this picture. Months later my wife and I discovered it and were genuinely moved by its unintended symbolism. We still are to this day. We all know the expression, ‘A picture is worth a thousand words.’ Sadly, this picture symbolizes not only thousands of words, but also thousands of lives lost on that fateful day.” –Ken Reynolds

Remembering 9/11: The good that followed the evil 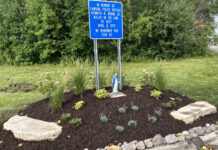