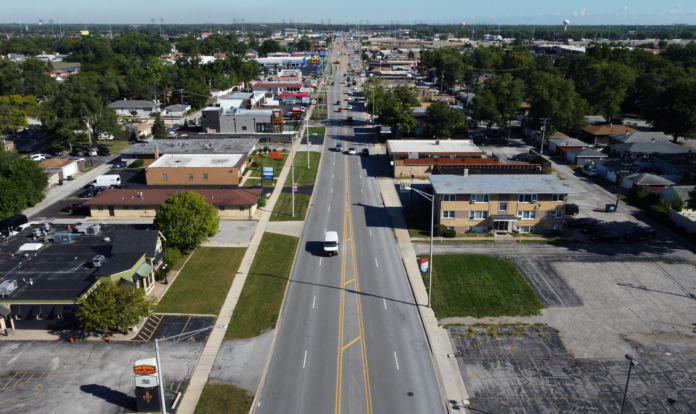 LANSING, Ill. (September 9, 2021) — The last two Village Board meetings have been full of business proposals from new businesses coming to town or existing businesses looking to move or expand.

As is standard procedure at Village Board meetings, before coming to a final vote, a presentation is often made at a Committee of the Whole meeting, allowing trustees to ask questions of petitioners and do further research in between meetings. The August 17 Committee of the Whole meeting lasted nearly three hours, largely due to presentations from multiple potential businesses.

During the September 7 meeting, Village Trustees took final votes on the proposals, which are outlined below.

Patel is a franchisee for Smoothie King, and hopes to bring a 1,300-square-foot building to the lot along Torrence. Patel said he currently is working on seven Smoothie King shops in the region, with more to come.

Patel said the ideal timeline would be opening for business in the summer of 2022.

The Village Board voted to approve a tax increment financing redevelopment agreement with Patel’s LLC — Parth45, LLC. The Board also voted in support of a Class 8 Real Estate Tax Assessment Classification for the Smoothie King as well. The Class 8 program allows properties to be assessed at 10% of market value for ten years, rather than the standard 25% in Cook County — resulting in a lower tax bill for the property owner.

Attorney Adam Dotson from Sandrick Law Firm spoke on Patel’s behalf on August 17 and said the estimated tax bill for the property — with the Class 8 classification applied — would at least triple as a result of the development of the land, meaning more tax dollars for Lansing.

Immediately after approving Parth Patel’s requests Tuesday night, the Board approved requests from another Patel family — a brother and sister looking to move their current liquor store at 3437 Ridge Road to the former American Sale building at 16955 Torrence Avenue.

The Patels already own multiple liquor stores in Lansing, including Santori’s, Torrence Tap, and Vierk’s on Ridge Road, which is the location they plan to move to Torrence.

The proposed 13,500-square-foot facility at the high-visibility corner of Torrence and 170th Street would resemble a Binny’s Beverage Depot, said the Patels. The pair hopes to maintain the building as a two-story structure, with room for alcohol tastings and expanded product offerings.

The Patels said they are planning to buy the building for $1.7 million and renovate it for at least half a million dollars. They also plan to bring grass and landscaping to the property, especially along Torrence Avenue.

“It will be a huge store with two stories, it will be one of a kind in the entire southern Cook County area,” the Patels told the Board on August 17.

Trustees voted on Tuesday to approve both a Class 8 Real Estate Tax Assessment Classification for the proposed Bevda’s Beverage Superstore. The Board also voted to amend the Village Code, adding a Class 17 liquor license to the books and issuing it to Torrence Liquors, Inc., the company behind the proposed Bevda’s. The exact terms of the new class of liquor license were not discussed at either the August 17 or September 7 meetings, and were not available online as of this writing.

Attorney Dotson spoke on behalf of the Patels on August 17 and said the tax bill for 16955 Torrence Avenue would increase by a few thousand dollars with the new development.

Residents who have been to Ron’s Reels southwest of the Torrence and 170th Street intersection will have an idea of what the owners Dave & Jeff Badali want to bring to 16907 Torrence Avenue, just a few hundred feet northeast of their existing location. Cheers Video Gaming Café, which would move into the former Supercuts storefront, is planned to have six seats for slots and video poker players.

Village Administrator Dan Podgorski said Ron’s Reels brings in significant revenue for the Village and LPD has received minimal calls at the existing location. The Badalis estimated that the Village of Lansing has received $50,000 a year from Ron’s Reels. They said the proposed Torrence location might bring in more money, given the higher visibility.

Illinois law dictates that in order to receive a gaming license, an establishment must have a liquor license. On Tuesday, the Village Board voted to approve a Class 9 liquor license for Cheers Video Gaming Café — which would allow the business to serve wine and beer on the premises.

The vote was the only one of the day that wasn’t unanimous, with Trustee Jerry Zeldenrust offering the following statement:

As to the motion in support of the Cheers Video Gaming Café liquor license: …The addictive nature of gambling is well documented, and I have seen firsthand the devastating effects it can have on some individuals. I have spoken before about the research done on this topic, and I feel the negative effects far outweigh any monetary benefit the village stands to gain by another gaming café. The results of how we cast our votes here determine what our town will look like and be known for. I really do not wish for Lansing to become known for having that little out of the way corner with the gambling places. It’s just not what I hope to leave as a legacy for the next generation of Lansing residents. I cannot vote in favor of this motion, but I acknowledge mine is only one opinion among my peers, whom I respect despite any differences we may have.

Bryeasha Blair came before the Village Board on August 17 to explain the new fitness studio she wants to bring to 3365 Ridge Road, Suite 2. Blair plans to use her training background and her experience playing basketball overseas to create an appointment-only fitness studio.

She said the studio will train primarily through one-on-one or small group sessions.

“My main goal is just to instill positivity into as many people as I can while I’m here. I feel like that’s my mission and my purpose while I am a human being,” Blair said.

Village Trustees voted Tuesday to grant a special permit for an “indoor recreation” use for Never Surrender Studio.

Waddie Ann Walton made another appearance before the Village Board on August 17, after first coming before the trustees in 2020. Changing her original plans, Walton nows wants to bring her event venue to a smaller space, located at 2 River Place, Unit L.

Walton hopes to host weddings, corporate events, parties, and other social events at the location. The new location is 2,600 square feet, roughly half the square footage of the original space she was interested in. At this point, Walton said she is not pursuing a liquor license for the business.

On Tuesday, Village Trustees voted in favor of granting Walton an “indoor amusement” special use permit.

Starbucks plans to open in Lansing at the northeast corner of Torrence and Thornton-Lansing Road, as first reported in December of last year. The Village of Lansing requires that businesses intending to use a drive-through get approval from the Village Board. Administrator Podgorski explained this protocol exists to prevent a poorly-designed drive-through from backing up cars into busy roads in town.

Trustees voted unanimously to approve a drive-through for the future Starbucks.

Dan Abdo from Glazier Development Group said he hopes the Starbucks can open in the spring of next year.

Chipotle Mexican Grill — During the Committee of the Whole meeting on Tuesday, Dan Abdo from Glazier Development — the same group developing the Starbucks — presented his vision for a new Chipotle Mexican Grill on the northwest corner of Torrence and Thornton-Lansing Road. The fast-casual burrito and taco restaurant would be across Torrence from the future Starbucks, and a neighbor of the combined use medical and residential facility recently approved for the western side of the same lot. Trustees will vote on a purchase and sale agreement for the property at an upcoming meeting.

“Since Dan [Podgorski] became mayor in 2001, and I a trustee along with him, this is the most aggressive, positive, exciting agenda that I’ve seen in those 20 years,” Mayor Patty Eidam said at the August 17 Village Board meeting.