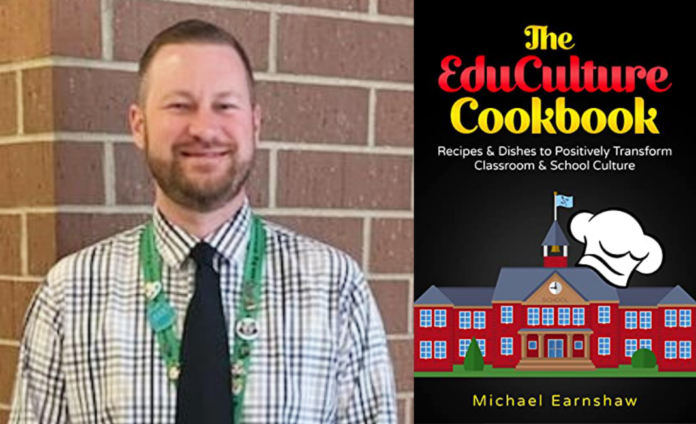 Yes, that Mike Earnshaw, principal of Oak Glen Elementary and author of “EduCulture Cookbook: Recipes & Dishes to Positively Transform Classroom & Social Culture.”
His debut book, released September 1, comes straight from the classrooms of Oak Glen, where he has served as principal for the past eight years.

In the EduCulture Cookbook, Earnshaw dishes real, relevant, and emotional stories that have helped him cook up collaborative school and classroom environments that showcase teachers and students knowing their strengths, building on their weaknesses, displaying empathy, and becoming empowered to work together.

“I’ve always known that if you don’t have the right positive climate and meaningful relationships among teachers and with students, no true learning is going to take place,” Earnshaw said. “So, I’ve always made it part of my mission to create an environment where people want to be and want to take risks.”

Earnshaw brings that creativity to the forefront in the EduCulture Cookbook, creating “recipes” for teachers to motivate students and for principals to inspire teachers.
“I’m not the type of educator that wants to read a book full of references and research,” he says. “So, I write more in a narrative style where I’m telling you a story and you’re reading almost like a fiction novel.”

Earnshaw had been a frequent blogger on educational topics, which started gaining notice and making their way into education networks around the country. In fact, he liked to share articles himself with Oak Glen teachers, explaining that he would make reading educational articles fun by turning the activity into a “speed dating” sort of exercise where the sharing was fast and furious. That’s just one of the success formulas he brings to his book, which was inspired by his daughter.

“I was sitting in the kitchen one night writing and she asks if I’m writing a book,” he said. “And then it just clicked that maybe I can share some of the stuff we’ve done at Oak Glen with other educators as a book.”

Earnshaw had only two chapters finished when a fellow educator read his work during a conference in Ohio and fell in love with his recipe approach. She immediately recommended him to her publisher — “who was so in love with the concept that they didn’t care I had only a couple of chapters done.” He couldn’t believe it, but he soon had a book deal.

Earnshaw admits that he got a bit bogged down in writing during the pandemic, not an easy time for any educator. However, pandemic-focused recipes for educators made it into the book.

“When the pandemic hit that really slowed me down,” he says. “I kind of lost my motivation. I wasn’t with my students and staff. We were all at home and it was a struggle. I started worrying about everything I was writing about not being relevant if we never returned back to school.”

School is back to as normal as possible this year, and Earnshaw finished writing the book by May. Then came the editing portion of the process over the summer, picking out the page formats, and choosing cover art.

“I’m beyond excited that the book is out,” he says. “It feels very surreal to see it come to fruition.”

Earnshaw co-hosts a podcast with a fellow educator from Arizona called the “Punk Rock Classrooms Podcast,” which is now in its third season. Those who really know Earnshaw won’t be surprised by the name of the podcast.

“We both grew up in the punk rock scene, so we talk about kind of the ethos and mindset of punk rock and how it applied to education,” he said. “It’s about passion, unity, and a do-it-yourself attitude. Yes, I’m a principal, but that doesn’t mean I have to live by the stereotype.”

With his podcast partner as a co-author, Earnshaw hints that another book could happen.

“I think there are some other beautiful things about education that I feel very passionate about that I want to get out there,” he says. “So, this is definitely not the last book.”

Where to buy the book

Visit Earnshaw’s Instagram page or read his blogs to learn more about him.