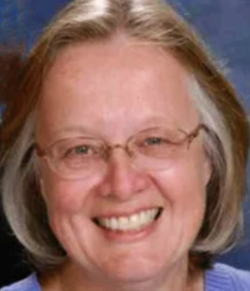 Ellen was born on October 31, 1951 in Hammond, IN, the daughter of Hans and Borghild (Soreide) Stole. She married Daniel Cluver of Watseka at Trinity Lutheran Church in Lansing, IL, on June 15, 1974, and he survives.

Ellen was preceded in death by her parents and one infant daughter.

Mrs. Cluver was a member of Calvary Lutheran Church in Watseka. Ellen played tennis, volleyball, basketball, and softball at Concordia University where she received her Master’s Degree. Ellen was a Lutheran school teacher at five different schools for thirty-eight years. She enjoyed history, especially being the first of her generation born in the United States. She played in a women’s softball league, the Hoffman Softball Team. She was an avid sports fan, especially of the Chicago Cubs.

Visitation will be from 9:00 a.m. until the 11:00 a.m. funeral services on Saturday, August 7, 2021, at Calvary Lutheran Church in Watseka. Rev. Aaron Uphoff will officiate. Burial will follow at Oak Hill Cemetery.

Memorials may be made to Iroquois Memorial Hospice or Calvary Lutheran Church.