The Honor Flight Network formed in 2005 with a mission of honoring our nation’s veterans by bringing them to Washington, D.C., for a day to see the memorials and monuments dedicated in their honor. Several Lansing veterans have participated in Honor Flights in past years.

The flights season typically runs from April through October for seven flights per season, but the entire 2020 season was put on hold due to the pandemic. The organization has been working on scheduling the first flights since 2019 while being mindful of the safety of the veterans, their companion travelers, and the volunteers. It recently announced that a four-flight season will begin in August.

Lansing resident and former Village Trustee Maureen Grady-Perovich has been a longtime volunteer (and one of more than 1,000 active volunteers) with Honor Flight and is thrilled that the organization will be resuming flights to honor area veterans.

“It is a privilege to give back to our men and women who served our country. I am so excited to get back to the Honor Flight office and help get the August flight off the ground,” she said. “Although I enjoyed delivering recognition signs during the pandemic, there is nothing better than flight day and getting a chance to meet our heroes.”

The lawn sign program began to recognize veterans during the pandemic when no flights could take place.

“We wanted to make sure our veterans knew we were still thinking of them and were still thankful for their service during the pandemic, so we created a yard sign program to publicly recognize our heroes. Volunteers hand delivered yard signs or window decals to these veterans’ homes,” explained Doug Meffley, co-director of Honor Flight Chicago. “The program was so successful and the visits meant so much to the veterans that we expanded to our entire waiting list and then offered the signs and decals to our more than 4,000 living alumni as well.”

Honor Flight Chicago has secured a bigger plane with their partner Southwest Airlines, and the plan is to now fly between 110-115 veterans on each flight. Also, while the previous schedule limited flights to one per month, there will be an additional flight in October this year.

“In this shortened season we will fly our typical once per month in August, September, and October,” said Meffley. “We also will be adding a special fourth flight in early October with our partners Operation HerStory. This all-female veteran flight was initially announced in February of 2020, and was scheduled to fly in October of 2020, but now will fly in October of 2021.”

Veterans who missed their flights last year will remain at the top of the waiting list to retain their places in line this season and be among the first invited, said Meffley.

Safety remains a big concern this season and Meffley said Honor Flight Chicago will be following all current CDC, state, and federal guidelines as of each flight date.

“We recognize that the guidance is changing constantly and want to make sure we’re observing the most up-to-date information. We are prioritizing veterans who have been fully vaccinated and are requiring that all guardians who travel on the plane, as well as all volunteers who directly interact with the veterans at each airport, be fully vaccinated,” said Meffley. “We anticipate limiting crowd sizes for our welcomes and send-offs, and also limiting the interactions the general public have with our veterans while we are visiting their memorials.”

According to Meffley, the Honor Flight movement started to bring WWII veterans to their memorial which took until 60 years after the war to complete.

“The trip quickly evolved into a truly life-changing experience and we saw the need to expand to our Korean War veterans, who fought in the ‘forgotten war’ and our Vietnam War veterans, who were treated despicably upon their return from service,” he explained. “In the process of giving these veterans the love, respect — and in many cases the healing — they should have gotten many decades ago, we inspire future generations to respect our nation’s military veterans. In this way we feel that we are making an impact not only on our seniors, but on every man and woman who puts on the uniform now and in the future.”

Both of Meffley’s grandfathers served in World War II and several uncles served in Vietnam, which gives him a better understanding of what this flight means to those who are able to participate.

“This is my way of giving back to them. To see and talk with the veterans both during and after their trips and also to hear from their families what an impact the day had on their veteran is so affirming to our mission. Often when a veteran passes away, the family will designate memorial gifts to Honor Flight Chicago and tell us that it was the greatest day of their veteran’s later years. It’s our privilege to do what we do,” he said. 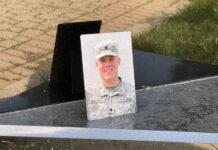