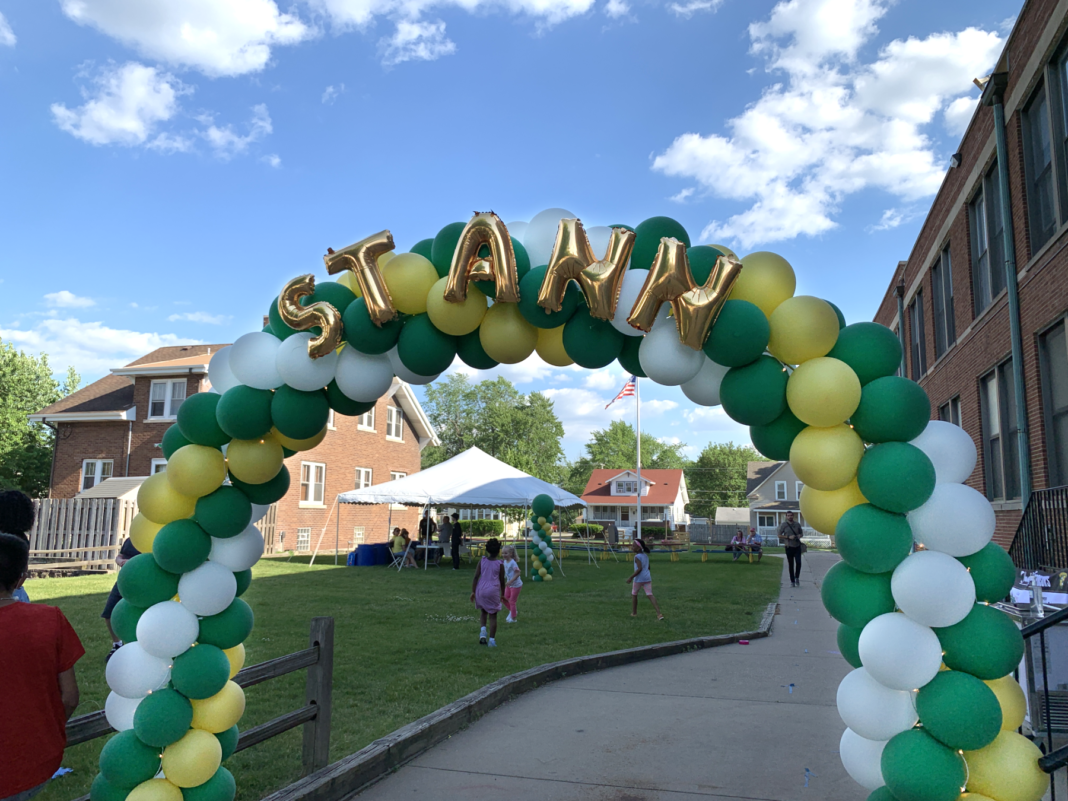 Community reconnects and remembers as part of bittersweet event

School-related chatter echoed through the storied halls one last time starting at 1 p.m. on Saturday, as classmates, teachers, and others walked through the building. Tales of basketball ball hogs, scampish students, and haunted hallways were among just some of the conversations that could be overheard as hundreds of touring people were brought back in time to their elementary and middle school years.

The school open house was the main attraction of St. Ann School’s “Final Farewell” event Saturday afternoon, an event that also included a Mass at St. Ann Church and an outdoor picnic and party in the school parking lot.

Though a bittersweet situation, the emotions in the school throughout the afternoon were mostly joyful. Students reconnected with old friends, and bonded over their distant athletic accomplishments. A pair of former elementary teachers could be seen embracing after years apart. One former student walked past a former teacher that didn’t recognize him. He said her name and when it was clear she still didn’t recognize his masked face, he pointed to his last name printed on the back of his t-shirt. She cried out in surprise and rushed to give him a hug. Such was the atmosphere in St. Ann School on Saturday.

On the second floor of the building, Jim Barrett recognized a carved piece of art that has been in the school since he graduated in 1979.

“I don’t know where it was, I think was downstairs for many years, but it was iconic,” Barrett said as he stood near the carved artwork. “I think that was in the original church for most of my youth.”

When Barrett attended class, the “original church” was on the main floor of the building. Directly above the sanctuary, said Barrett, were the middle school rooms. He remembers the frequent chiding he and his classmates received to walk quietly in class and in the hallways to avoid disturbing praying parishioners below.

“If your footsteps were too heavy, they’d call you on it,” Barrett said.

The former sanctuary was converted to classrooms and offices when the current St. Ann Church building was completed in 1997.

Judy Wohadlo started teaching at the school a year after the church’s completion in 1998. She taught third grade for the majority of her twelve-year tenure, but also spent time teaching sixth and fourth grade classes as well.

“It is [bittersweet],” she said, “I didn’t know if it would affect me. I walked into my old classroom on the first floor and I was thinking, ‘Wow, this is where it all started.'”

Wohadlo said when she looks at her old chalkboard, she remembers a certain type of paper she used to put over it — and also remembers working to cover the whole chalkboard with paper for a particular class only to walk in later and see all of it had fallen to the ground.

Wohadlo is also a St. Ann parent — her children attended the school between 1984 and 2003. She’s also a parishioner of St. Ann Church.

Longtime friends and St. Ann alumni Joe Gregori (Class of 2005), Joe Kaczmarszyk (2003), and Mike Matusik (2004) said the classrooms looked exactly the same as they’d remembered them. They also remembered playing early computer games in the computer lab down the hall.

As the trio walked down a stairwell from the second floor to the first, they paused and looked upwards at a metal bar they used to swing from as they would walk down the steps. Gregori hoisted himself up one last time.

70 years of education comes to a close

The St. Ann School building was dedicated in 1950, and school started that fall with 296 students in attendance, according to St. Ann’s website. The annual tuition at that time was $35.

Decades of success finally came to an end in more recent years as enrollment continued to decrease and financial burdens continued to increase. On January 21, the Archdiocese of Chicago said in a statement, “St. Ann School, located in Lansing, has faced a decline in enrollment of 33 percent over the last four years. As a result of the loss of 62 students, the school faces a deficit of $270,000 this school year and despite strong fundraising efforts cannot cover its debt.”

The St. Ann community did rally to support the school in late 2020 and into the new year, but the efforts fell short.

Mass was held at St. Ann Catholic Church on Saturday at 4 p.m., which drew a large crowd of St. Ann School tourers. One usher said he estimated the Mass drew a crowd double that of normal. Over 150 people attended.

Following the service, crowds gathered in the parking lot of the church and school to talk, listen to a live band, play games, fill out raffle tickets, take photos, and eat Boz Hot Dogs.