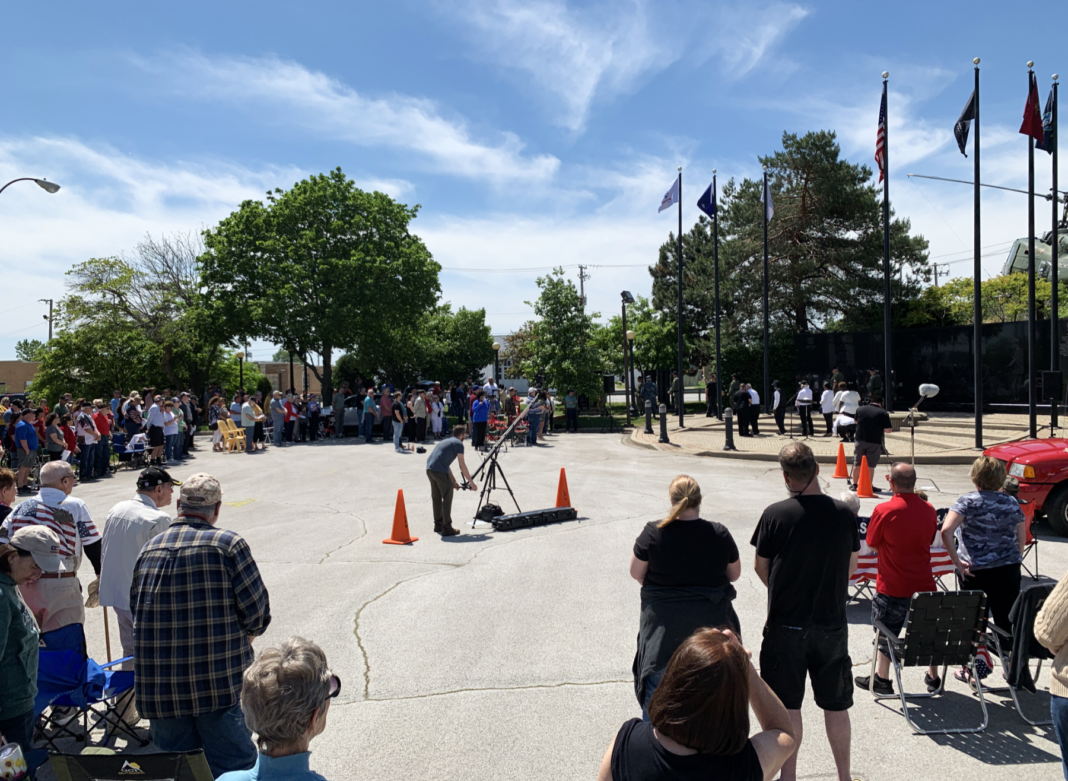 LANSING, Ill. (May 31, 2021) – The Lansing Veterans Memorial Ceremonial Honor Guard once again held its annual Memorial Day Service on the Sunday before Memorial Day. The annual service is dedicated to preserving the memory of the men and women who have died while on duty with the military, especially those from Lansing.

The event started at 2 p.m. on Sunday as the sun shone brightly and hundreds gathered around the Lansing Veterans Memorial at the corner of Glenwood-Lansing Road and Burnham Avenue.

The welcome address was given by Lansing Honor Guard member Jeff Schoettle, who reminded those in attendance of the responsibility to remember.

“We remember that it is their courage, their unselfishness, their devotion to duty that has sustained this country through all of it’s trials and will sustain us through all trials to come,” Schoettle said in his speech.

The South Suburban Chorale led the National Anthem, as well as other patriotic songs following the ceremony.

A special address was given by John A. Meeks II, a member of U.S. War Dogs Association Chapter 3. Meeks went through the history of some of the war dogs in American history. In particular, Meeks developed a special bond with scout dog Artus during his time in the Vietnam War.

“What does give me a peace of mind, is that I know, once I’m gone, Artus will still be here,” Meeks said fondly, referring to a statue of his former dog that’s located at the Lansing Veterans Memorial.

Meeks wrote a book about his and Artus’ relationship in “Before, During, and After VIETNAM: A Story of a Scout Dog Handler and his Dog.”

Boy Scout Troop 276 led the presentation of the casket flags that spanned all the wars the United States was involved in, followed by family members and organizations placing wreaths around the memorial monument and an invocation given by Our Lady of Knock Church.

Michael Sanow, President of the Lansing Veteran Memorial, gave background on the tri-panel structure and the significance of the names etched in stone.

The video below includes highlights from the event. Video taken by Quinton Arthur:

Adam Goodman, Nathan’s younger brother, is proud of his brother and his legacy. Though they didn’t always see eye to eye, Adam has learned more about his brother’s life now more than ever before.

“He loved his country so much,” said Goodman. “His legacy is written down on paper. A great smile, a great human being, and a badass soldier.”

The ceremony ended with the flag lowering, the highest symbol of respect for fallen heroes. After the ceremony, the audience was invited to experience the memorial. Tom Luberda, one of the founding members of the memorial, helped designed the monument to give people an experience of what Vietnam was like, using trees, bushes, and plants to set the scene around the memorial.

Lansing Honor Guard member Jeff Schoettle knows that recognition and remembrance is one of the best ways to honor those lost during Memorial Day.

“Our nation owes a debt to our fallen heroes that we can never repay, but we can honor their sacrifice and we must. We must honor it in our own lives by holding their memories close to our heart and heeding the example they set,” Schoettle said.

As another year goes by, the fallen heroes will forever be etched in the monuments and in hearts across Lansing.