LANSING, Ill. (May 30, 2021) — Redwolves is the favored new nickname for TF South High School, but some students are saying not so fast.

Sophomores Kyndall Jackson and Breanna Lopez addressed the Thornton Fractional Township Board of Education at its May 25 meeting to say that they and many of their classmates feel they have not had adequate opportunities to offer input on the new name. Besides, they’re not too fond of “Redwolves,” or “Redhawks,” and “Flying Aces,” which were also selected as finalists through polling among students.

“The names are boring. We want something more unique that reflects the character of TF South,” Jackson said.

“I don’t think most students are down with the choices we have,” Lopez added.

Jackson believes many of the students wanted to keep the former school nickname of “Rebels” and don’t feel that it has racist connotations. However, she and Lopez say they understand why other students may feel differently and respect their views.

TF South polled students in 2020 about whether to change the school nickname. Of the 325 who responded, 69.5% supported doing away with “Rebels.”

Jackson, who served on the student naming committee, said the group met infrequently and that virtual meetings were often poorly attended, which she believes resulted in less-than-exciting choices. She and Lopez presented the board with comments from 10 students, who offered their opinions on the naming process and the final choices.

As junior Taevon Gaines said, “None of them really stick out. They sound cool but they don’t really represent the school. We didn’t have much say in it, so I’m just picking the one I like the best, but none of them are that great.”

Despite a year in the making, Jackson feels the whole process has been rushed and lacked creativity.

“Many of us felt that only being able to pick between five options and then not being sent the data of each option left us oblivious in the process,” she said. “I personally think having a ‘none of the above’ option would have benefitted many of us who voted. The students of TF South want to have pride in their name and mascot. How can we possibly have South Side pride under a mascot we chose out of convenience?”

TF South Principal Jacob Gourley pointed to two students online polls, with 324 students responding to the first poll and 366 responding to the second. In both polls, “Redwolves” came out the favorite. He acknowledged that the process has been a bit uneven during the pandemic and through remote learning.

He likened the process to “1,800 people trying to choose a baby name,” and feels confident students have had ample opportunities to provide input. But the final decision is now in the school board’s hands, and he believes they will make a decision soon.

“We’ve gone a year without a name, so we’re at the point where it’s time to start buying new uniforms and updating signage that had been taken down,” Gourley said. “I don’t want to go another year with blank walls and generic uniforms.”

One thing that won’t change are the school colors — red and gray with a splash of black.

The issue of dropping the school nickname was initially raised in 2017 when student Mia Pettigrew wrote an essay for her government class arguing that the name “Rebels” should be eliminated.

On August 25, 2020, the school board officially dropped the “Rebels” nickname, which had been TF South’s moniker since its founding in 1958. The school had adopted the imagery of a Confederate soldier, the Confederate battle flag and the nickname “Rebels,” which was essentially a pun that the “South” had seceded from the (TF) “North” campus. TF South had dropped the “Richie Rebel” symbol around 2005, and the Rebel flag was removed from school property during the mid-1990s.

Please help The Lansing Journal continue providing quality coverage of the issues that are so important to our community.


Choose an amount that works for you: 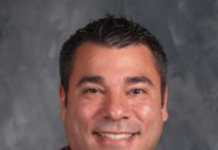