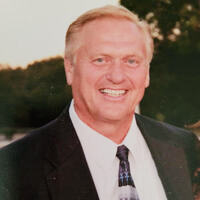 Connie is remembered by his family as an avid sports fan and athlete. He started early, becoming a star player on his Knights of Columbus little league team. He excelled at football and was all-conference while in high school at TF North, went on to play center with a full ride athletic scholarship to Purdue University, and was drafted into the NFL where he played for the Chicago Bears and Buffalo Bills. He was a life-long golfer who counted a hole-in-one as a great personal accomplishment, and regularly played with friends and family. Connie was so adept at chess that he beat the president of the Purdue chess club, and even beat a computer program.

In his post professional football years, he worked in sales for several companies specializing in technology. His career took him around the world, and he was well-respected and accomplished for his hard work, affability, and charisma. Even with a busy work schedule, he always found time for his family and considered them to be the most important part of his life. He coached every manner of sports for his kids and never missed a game.

In his spare time, he enjoyed tinkering with his pride and joy: a vintage, custom, cherry-red 1968 Pontiac Catalina convertible with a problematic gas pedal. Connie spent winters in his basement workshop building woodworking masterpieces and many other craft projects for friends and family. He loved to travel and dreamed of criss-crossing the country in an RV.

Memorial Visitation Thursday, May 27, 2021, from 4 – 8 p.m. with a Memorial Service and Time of Sharing at 7 p.m. at Smits Funeral Home 2121 Pleasant Springs Lane, Dyer, IN.  Memorial contributions may be given to St. Jude Children’s Research Hospital (www.stjude.org).

Will you join our community of faithful supporters? Your gift at any level helps ensure that we can report, publish, and deliver local news every day. And when you agree to give monthly, you provide a reliable source of income that helps us plan our news coverage.