Unemployment remains at 7.1 percent in April

Information provided by the Illinois Department of Employment Security

SPRINGFIELD, Ill. (May 20, 2021) – The Illinois Department of Employment Security (IDES) announced that the unemployment rate remained at 7.1 percent from March to April, while nonfarm payrolls were about unchanged, up +300 jobs, in April, based on preliminary data provided by the U.S. Bureau of Labor Statistics (BLS) and released by IDES. The March monthly change in payrolls was revised from the preliminary report, down from +32,300 to +28,900 jobs. The March preliminary unemployment rate was unchanged from the preliminary report, remaining at 7.1 percent.

In April, the three industry sectors with the largest over-the-month gains in employment were: Leisure and Hospitality (+8,100), Government (+4,300), and Construction (+4,000). The industry sectors that reported monthly payroll declines were: Manufacturing (-7,800), Professional and Business Services (-4,900), Educational and Health Services (-2,800), and Trade, Transportation, and Utilities (-2,800).

“As the state works through the bridge phase to a full reopening, IDES will continue to support claimants while also ensuring information is provided that supports both employers and jobseekers,” said Deputy Governor Dan Hynes.  “IDES and the Pritzker administration look forward to working with the Biden administration and US DOL to identify and implement new strategies to reengage dislocated workers into the labor force.”

Compared to a year ago, nonfarm payroll employment increased by +408,400 jobs, with gains across most major industries. The industry groups with the largest jobs increases were: Leisure and Hospitality (+135,000), Trade, Transportation, and Utilities (+107,800), and Professional and Business Services (+56,300). Illinois nonfarm payrolls were up +7.7 percent over-the-year as compared to the nation’s +10.9 percent over-the-year growth in April.

The number of unemployed workers rose slightly from the prior month, a +0.5 percent increase to 438,100, but was down -56.0 percent over the same month for the prior year. The labor force was up +0.3 percent over-the-month and +2.0 percent over-the-year. The unemployment rate identifies those individuals who are out of work and seeking employment. An individual who exhausts or is ineligible for benefits is still reflected in the unemployment rate if they actively seek work. 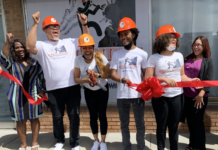 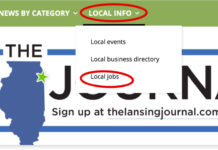 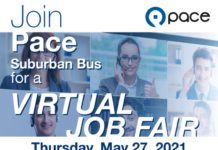