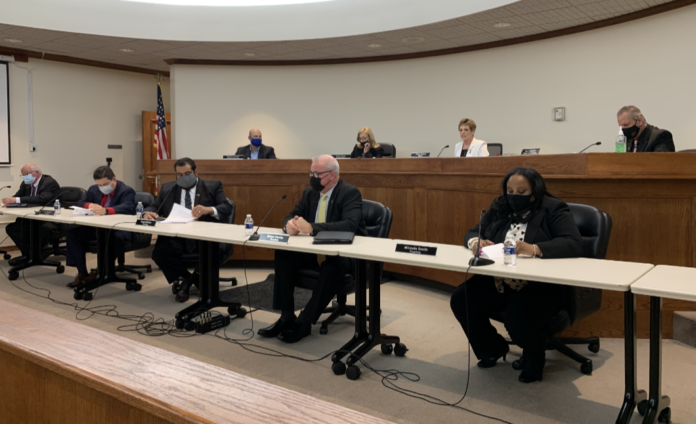 LANSING, Ill. (May 5, 2021) – The Village of Lansing swore in its newly elected trustees Tuesday night, solidifying a historically diverse Village Board of Trustees.

Mayor Patty Eidam and Clerk Vivian Payne also reaffirmed their oaths of office. Both women will continue in their current positions for another four years after winning uncontested races.

On Tuesday night, each current and former officeholder was given the opportunity to speak to the larger-than-usual crowd assembled in the Lansing Courtroom. Some comments are included below.

Grady-Perovich was elected as an independent to the Village Board of Trustees in 2017. As Grady-Perovich’s last Board meeting began on Tuesday, she was the only active trustee not associated with the Village Voice Party — the party to which the entire Board now belongs.

Grady-Perovich thanked her fellow trustees, the residents of the Village, and the Village department heads with whom she worked during her four years as trustee.

“Most of all, I want to thank the employees of the Village of Lansing whose tireless efforts make this Village the best that it can be,” she said on Tuesday night. “They serve the residents and businesses of Lansing in areas such as airport, insurance, water service, youth activities, streets, fire service, electrical work, law enforcement, cable news, bills and payroll, buildings, economic growth, and our incredible front-line Municipal Center staff. These men and women are the Heart and Soul of Lansing. I thank you for your service, and I thank you all for allowing me the opportunity to get to know you and serve you.”

Clerk Payne presented Grady-Perovich with a plaque in recognition of her service.

Hardy has been a Village Trustee since 2017, and he received the most votes during the April 6 election, with 1,075. Hardy owns Chicago’s Finest Ironworks in Lansing.

Hardy thanked the residents of Lansing as well as his wife Kathy, and the Village Board, administration, and employees.

“I thank the Lansing residents for giving me the chance to do what I love to do — I love serving the Village of Lansing, and I’m going to give you my best” Hardy said. “I promise I will always make the best and wisest decisions, and when we all work together, we make great progress.”

Smith is the newest member of the Village Voice Party, but is not new to serving Lansing. She was appointed to the Lan-Oak Park District Board, making that Board diverse for the first time. She was re-elected to the Park Board in 2019 and has served on Lansing’s first Human Relations Commission since it was formed in 2018.

As she took the oath of office on Tuesday, Smith became the first African American trustee in Lansing’s history.

“I am truly honored to sit here before you guys as Trustee Smith, breaking barriers and making history as the first African American to serve the Village of Lansing,” Smith said. “I can now be the leader that I’ve worked so hard for and that I’ve trained and been groomed to be. I will not let you guys down. … And as always, please hold me accountable and let me know when I’m right and when I’m wrong.”

Trustee Saad Abbasy, who is Jordanian and was elected in 2019, told Smith later in the meeting, “What I love about you is that it would be easy to just look at you as the first African American person to serve as trustee, but you’re more than that. You’re qualified, you’re committed, you’ve been involved. And so that brings me great joy seeing you be elected, because you already bring so much to the table.”

Leo Valencia was appointed to the Village Board in August 2020 following the death of Trustee Mike Manno. Valencia is the former chairman of the Lansing Human Relations Commission and is a past president of the Lansing Association for Community Events.

“In the last nine months, what’ I’ve learned is — I’ve learned your hearts. And I’ve learned that this is where I want to be,” he said to the Village Board and administration Tuesday night. “I want to challenge the community — because you don’t have to be an elected official to give back to your community. There are so many groups and organizations that want to give back that I, you know — I’ll dare say — that actually could do more for the community than this group we have here [the Village Board].”

Valencia, who is Latino; along with Smith, who is Black; and Abbasy, who is Jordanian, occupy three seats on the Village Board, meaning half of the seats are currently filled with people of color.

Clerk Payne was elected to the position of Village Clerk in 2017 after serving as Executive Assistant to Mayor Norm Abbott before that. Clerk is also an elected trustee on the South Suburban College Board of Trustees.

Payne thanked her family for their support as well as the residents of Lansing.

Mayor Eidam was elected in 2017. Before that, she served the Village of Lansing as a trustee and also as the clerk.

Eidam read a prepared statement Tuesday night after all other elected officials had made their comments. Her 13-minute statement included references to the work the Village of Lansing has achieved under her watch during her four years in office.

Eidam mentioned the establishment of the Human Relations Commission, the street resurfacing program, the Village’s relationship with surrounding leaders and organizations, and the success and growth of Fox Pointe as benefits to the Village that she helped start or cultivate. Attracting new businesses to town is another goal Eidam has helped the village achieve, she said.

“We’ve made significant progress in answering the call for diversity and inclusion in our Village government, staff, and employees,” Eidam said, citing the Human Relations Commission, two African American department heads, and bilingual staff at the Municipal Center as examples. She also mentioned two minority appointments to Village commissions.

“Lansing has served as an example for our surrounding communities during the pandemic. Our Lansing residents are a strong, proud, and caring village that quickly found ways to help each other this past year,” she said.

Eidam also mentioned a conversation she’d had with State Representative Marcus Evans: “Marcus Evans mentioned to me just this past weekend that we, Lansing, may have the most diverse board of elected officials in the state of Illinois. We worked hard for that and yes, we are proud.”

Lansing Village Board meetings typically occur on the first and third Tuesdays of the month at 7 p.m. at the Police and Court Complex (Lansing Police Department), 2710 170th Street.