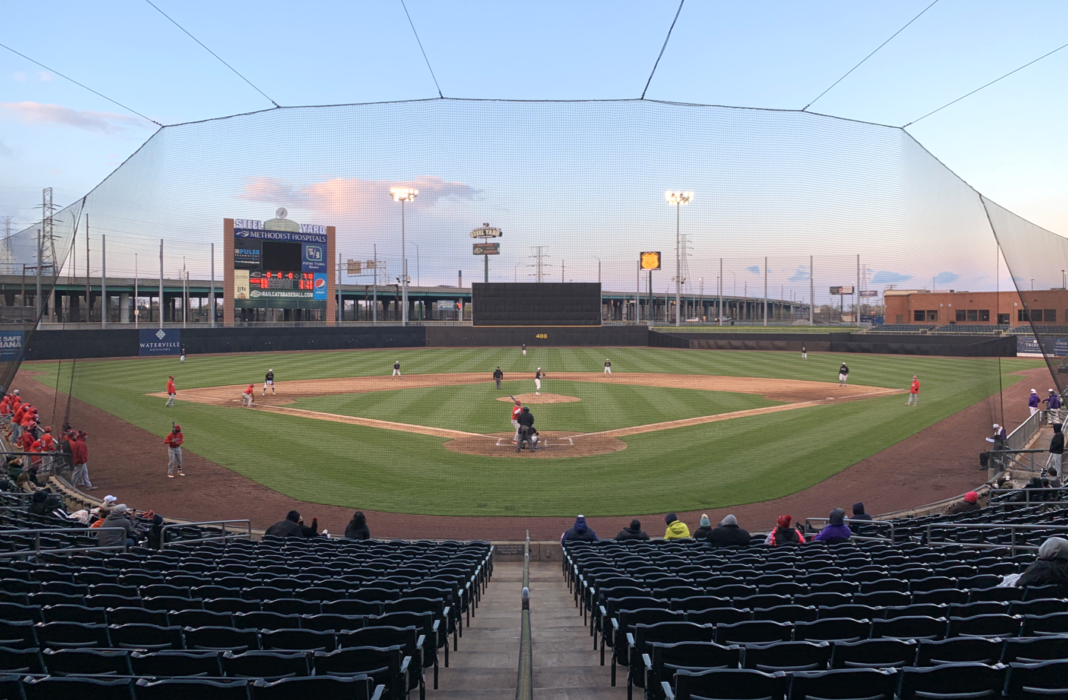 GARY, Ind. (April 21, 2021) – The annual district rivalry game between the TF South and TF North baseball teams was once again hosted at U.S. Steel Yard, a professional baseball stadium in Gary, Indiana, that is home to the Gary SouthShore RailCats.

The stadium, which can hold up to 6,139 people, held nearly 100 socially-distant fans for Wednesday night’s game, during which temperatures dipped to near freezing.

The chilling temperature didn’t cool TF South’s pitching or hitting, as the team held the Meteors to no runs while scoring 22 themselves. After scoring a pair of runs in the bottom of the first, TF South scored 8 runs in the second inning and 12 in the third. IHSA baseball rules dictate that if a team is leading by more than 15 runs in the fourth inning, a slaughter rule is applied, meaning the game is over. After TF North did not score in the top of the fourth, the game concluded with a final score of 22-0.

Head baseball coach Matt Tiffy praised the efforts of the whole team after Wednesday’s win, especially the efforts of the starting pitcher, senior Nate Salas. Salas threw all four innings in Wednesday’s contest, letting up only one hit and notching 12 strikeouts, according to Tiffy. 12 strikeouts in a four-inning game means every out in the game for TF South came via a strikeout.

“He did a hell of a job. Just getting him going was a big piece of [the win],” Tiffy said.

Lansing Journal photographer and videographer Nico Hernandez spoke to Salas on the field after the game:

Tiffy also said he was able to get all of his varsity players into the game at some point, something that was important for the seniors especially.

“We got our seniors to play, so they have this good memory. You know, they’ll always remember it. … Kids always look forward to this one, especially against TF North,” he said.

“Not many guys get to play on a professional field. … Look around, this is a great ballpark,” Tiffy added.

The Gary SouthShore Railcats are part of the American Association of Professional Baseball, an independent professional baseball league. The U.S. Steel Yard stadium was completed in 2002 and is located just south of Interstate 90 at 1 Stadium Plaza, Gary, IN.

Scenes from the ballpark

Nico Hernandez took photos and video for this story. He has his own podcast called WeSportin Podcast, where he talks about national sports with his cohosts. The podcast is available on YouTube.