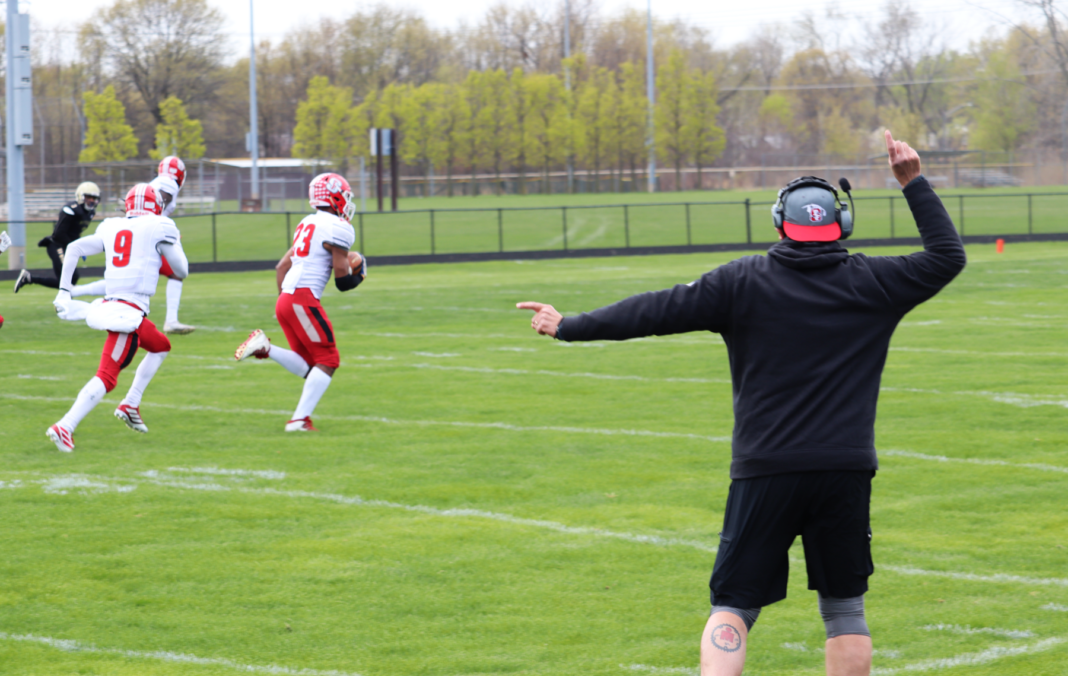 The victory secures TF South a yearlong custody of the Mushroom-Wooden Shoe Trophy, the trophy that has been given to the winning team of the district rivalry for over 60 years. The mushroom on the trophy is meant to represent the Polish history of Calumet City and the wooden shoe symbolizes the Dutch roots of Lansing.

A defensive first half

TF South kicked off to begin the game on the cloudy 50-degree Saturday afternoon. After letting the Meteors complete a 59-yard pass early in the quarter, TF South played well defensively, not allowing a score all game.

The defense was highlighted by two first half plays. In the first quarter, junior Ernest Temple intercepted a pass intended for a TF North receiver and ran the football back 77 yards for a touchdown. As the quarter ended, the score was 6-0.

In the second quarter, after a handful of unsuccessful drives by both teams, TF North fumbled the football and TF South senior Christopher Cox grabbed it and ran for a 72-yard touchdown.

After a last-second TF South pass that wasn’t quite long enough for a touchdown, the score at halftime was 12-0 favoring TF South.

Roughly four-and-a-half minutes into the second half, Temple scored another touchdown, this time on a 35-yard run into the end zone. After a successful extra point, the deficit increased to 19-0.

TF South almost added another touchdown in the third quarter on a run from senior quarterback Isiah Lewis, but the touchdown play did not count due to a penalty.

In the fourth quarter, Lewis threw to senior running back Wilson Buckley Jr. for a 7-yard touchdown. After an unsuccessful 2-point conversion, the scoreboard read 25-0. The video of the touchdown is below:

After stopping the Meteor offense once more, the final buzzer indicated a decisive TF South victory.

Though Lewis threw the ball for only 44 yards throughout the game, both he and others stepped up the running game to capture 196 rushing yards, according to team statistician Kenny Karrson. Buckley Jr. had 93 of the team’s rushing yards.

Temple, who scored a touchdown on both defense and offense in Saturday’s contest, had 71 rushing yards.

“[Temple] is a good junior leader, he got named as one of our captains today,” said TF South head coach Bob Padjen. “Just a great kid. Plays both ways and gives it his all.”

Padjen also said he was happy with the defense’s performance, saying they followed the game plan and contained some of TF North’s faster players.

“We pride ourselves on playing good defense. Our goal was to score one time on defense and get four turnovers,” he said.

The TF South football team is now 4-0 in conference play and 4-1 on the season.

TFS football players in their own words

Nico Hernandez was on the field talking with TF South players after the game. Some of his conversations are included below:

For the final match-up of TF South’s six-game season, the team will travel to Lemont High School and take on the Indians. There will not be playoffs this year due to the COVID-altered season.

“The next game’s a step up in class. Lemont’s one of the top teams in class 6A so we’ve got a lot of work ahead of us … We’ve been looking forward to this last game from the beginning of the year. Lemont versus South is always a good game,” Padjen said.

Reporter’s note: The Lansing Journal thanks Kenny Karrson for his help providing accurate and timely stats for Saturday’s game.