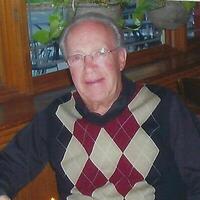 William Charles Haase, 91, passed away peacefully on Tuesday, April 30, 2021, at Community Hospital in Munster, Indiana. He was married to Patricia (Klyczek) Haase for 47 years, and was an amazing father, loving grandfather, and great grandfather, and a cherished uncle to many nieces and nephews.

Born in Hinsdale, Illinois on May 24, 1929, to Edward and Marjorie Haase, Bill was the youngest of three sons, including Donald and James. He grew up in Winnetka, Illinois, and quickly started to reach many of his major accomplishments. He quickly rose through the ranks of the Boy Scouts, achieving the rank of Eagle Scout, inducted into Order of the Arrow, and later in life was a member of the Calumet Council Boy Scouts Executive Committee. A gifted gymnast, Bill won the Outstanding Gymnast award in high school, and was second in the State of Illinois Diving Championships.

After graduating as Phi Kappa Tau, Bill was the founder of the Midwest Gymnastics Association, and formed teams to compete throughout the Chicagoland area, where he placed 1st all around in the central AAU championships, and later won two medals in the Canadian AAU meet. But gymnastics was not his only love. He was a private pilot, often flying his Cessna 182 to wonderful destinations. He was the captain of many racing sailboats, winning many medals and cups. He was a lifetime member of the National Ski Patrol, and an active patroller for over 45 years. During that time, he was a Patrol Leader, Station Chief, and Regional Chairman of the Board of Trustees. He hit the elusive hole in one at Deer Creek Golf Course and went Scuba Diving at many of the World’s best diving locations.

In addition to his impressive personal achievements, his professional achievements included being Senior Vice President and Chief Credit Officer of the First National Bank of Illinois, a life member of Robert Morris and Associates, the Secretary Treasurer of the Lansing Chapter of the Salvation Army for over 25 years, and a Lansing Lion’s Club member for 50 years with 25 years being in charge of scholarship funds, earning him the Melvin Jones Fellow award. A lifelong Cubs fan, he finally got to see them win the World Series.

Bill was a kind, patient, gentle, giving man who loved his family, and touched the hearts of all who met him. He will be missed. Due to COVID-19, there will be a private burial, with a Celebration Memorial to take place at a later date.