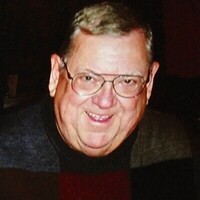 After nearly a century of thoughtfulness toward others, dedication to his craft, and an endless devotion to Chicago sports teams, revered attorney, loving husband, and beloved father Dale A. Anderson, 83, passed away on Monday, March 22, 2021, from complications due to cancer.

The son of Ruth Trada and stepson of Edward Jermolowicz, Dale was born in Hammond, Indiana. He grew up in Calumet City, Illinois. A graduate of TF North’s class of 1955, Dale attended Eastern Illinois University where he was a member of the Sigma Tau Gamma fraternity. After graduating from Eastern, he attended law school at Valparaiso University, received a Juris Doctorate degree in 1970 and settled in Lansing, Illinois where he forged his legal career, grew his family, and served as a trusted member of his neighborhood and community for over 60 years.

In the early days of his law career, Dale drove a flower delivery truck part-time, while he ‘cut his teeth’ as law clerk for Judge Fitzgerald, a prominent local judge. He later partnered with colleagues to form the law firm of Winterhoff, Anderson, Kiedaisch and Bergstrom. In 1980 he opened his solo practice on Burnham Avenue in Lansing, Illinois. He served as prosecuting attorney for Lansing for decades and held the position of Village Attorney for Lansing for eighteen years. Dale formed many lasting relationships during his tenure and was known as the “go to” guy for questions from his fellow lawyers. He was an active member of the Lansing Lions club for 55 years.

He was a great lover of words and wit, and was well known for his jokes, poems, and storytelling abilities (due, at least in part, to his abilities to recall stories and trivia.) His great love of Chicago sports teams was only surpassed by his ceaseless love of golf — Dale was an avid golfer and member of Lansing Sportsman’s Club for over 50 years. He also loved music and musicals, and could often be heard singing along (though his voice skills were not quite as sharp as his abilities with words.)

Always a patient listener and dedicated father, Dale was generous with his time, and respectful of all. He is survived by his loving wife Joan, son Michael, and daughter Laura. We are all blessed to have known the generosity, honesty, kindness and dedication he embodied — may we all carry forth these qualities as a tribute to his memory. Due to the COVID-19 pandemic, A Celebration Of Life for Dale will take place at a later date. Dale was loved by many and he will be truly missed.