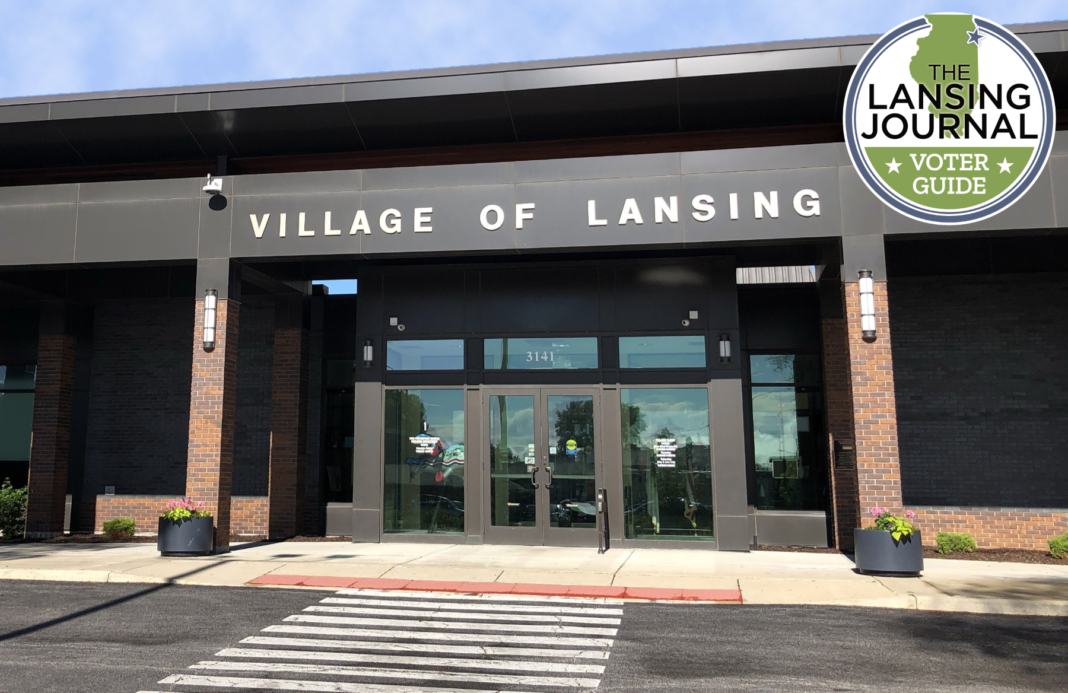 LANSING, Ill. (March 13, 2021) – During the April 6 elections, voters will see four names under the heading “Trustee, Village of Lansing”: Brian P. Hardy, Micaela G. Smith, Lionel Valencia, and Maureen C. Grady-Perovich. Three of those candidates will be chosen to represent Lansing residents’ interests on the Village Board for the next four years.

The trio of Hardy, Smith, and Valencia represents the Village Voice Party’s slate in 2021, along with Mayor Patty Eidam and Village Clerk Vivian Payne, who are running for those positions unopposed. Candidates Hardy and Valencia are trustee incumbents. Hardy was elected to the Village Board in 2017 after unsuccessful attempts in 1997 and 1999. Valencia was appointed by Mayor Eidam to the Board in August of 2020 after Trustee Mike Manno passed away in June. The appointment resulted in the forfeiture of Valencia’s chairmanship of the Lansing Human Relations Commission, a position Mayor Eidam had appointed him to in 2018.

Rounding out the VVP slate is Smith, who is currently serving as a commissioner on both the Lansing Human Relations Commission and the Lan-Oak Park Board. She will resign both those positions if her bid for Village Trustee is successful. Smith will be the only person on the ballot who does not have experience on the Village Board.

The fourth and final candidate, Grady-Perovich, is running as an independent. Grady-Perovich is a current trustee, elected to the position in 2017 after an unsuccessful bid in 2015.

A nursing professor at Prairie State College, Grady-Perovich is the only current trustee in the medical field. As COVID-19 has forced public bodies around the country to make difficult decisions, Grady-Perovich feels the Village of Lansing has done well in supporting its residents and businesses during the pandemic. “The Village has met every opportunity that the county or the state has offered,” she said, adding that she is particularly proud of how the Lansing fire and police departments have adapted safety protocols to keep firefighters and officers safe while still maintaining their high quality of service to residents.

Grady-Perovich does, however, think that the Village should have considered not increasing its tax levy this fiscal year, a move that some surrounding municipalities made in light of the financial difficulties COVID has placed on residents. She was the only Village Trustee to vote against the current tax levy in December of 2020, citing the increase as her reason for doing so.

Grady-Perovich has also vocally opposed other items brought before the Village Board, including a pay raise for the positions of trustee and mayor, a proposition that was presented by Village administration but never brought to a vote. She also spoke out against the Village’s consideration of hiring former Country Club Hills Mayor Dwight Welch as a Fox Pointe sponsorship coordinator due to questions surrounding his management of the Country Club Hills Theater.

A more recent topic of discussion at the Village Board has been street maintenance, one that the Village has thoughtfully addressed through the lens of fiscal responsibility.

Results from a recent pavement survey conducted on all 92.9 miles of Lansing streets revealed the following:

Estimations offered in a January board meeting suggested the Village would need to increase its spending from $1.1 million per year to $5.3 million per year for five years to get all Village streets to at least a fair condition.

Hardy thinks that with a reasonable priority given to both resurfacing and sealing, the Village can continue to maintain its streets without breaking the bank.

“Right now, getting out and sealing these [streets] with sealcoating and crack filling … staying on top of this and spending a little bit of money [will help us] get a lot more life out of our streets,” Hardy said. He also praised the Village for “aggressively” seeking out grants and pursuing alternative ways to raise funds for street maintenance and development.

The youngest candidate in the race, Smith hopes she can connect with Lansing’s millennial generation and Generation Z, today’s youth. Smith has connections with Building Strong Millennials, a group focused on empowering millennials and minorities, and she wants to bring her passion for helping young people to the Village Board. She also has a connection to State Representative Marcus Evans Jr., as she served as Chief of Staff in his office from 2012 to 2019.

“It’s things as simple as listening and asking what their interests and desires are and then offering that platform for them to do it,” Smith said. “They don’t feel heard, and I want to be that younger candidate that says, ‘I understand. I’m with you. I was your age too when I felt ignored.’”

As Smith has made a point to connect with youth, Hardy has connected with Lansing business owners in the face of increasing property taxes. Hardy, the longtime owner of Chicago’s Finest Ironworks in Lansing, is facing a potential 160% increase in property taxes this year as a result of the Cook County Assessor’s triennial property reassessments. Many Lansing businesses have spoken out against the widespread increases—some of which are considerably worse than Hardy’s—and Hardy has heard them.

Hardy and other business owners met virtually with Cook County Assessor Fritz Kaegi and some members of his staff to share their concerns about this year’s tax bills. “He hears what we’re saying, and he said he’d be getting back to us,” Hardy said, adding that Kaegi’s communication officer has been in touch with Hardy since that conversation, but no significant changes have yet come about.

Hardy has mentioned the reassessments at some recent Village Board meetings, and Village Administration has set up on online portal for residents to submit their reassessments to the Village. The Village also drafted a resolution in opposition of the Assessor’s drastic increases that Hardy hopes many public bodies will sign. He also hopes other local municipalities will follow suit.

“Businesses are the fabric of a community,” Hardy said. “I love our residents, and I want to make sure their property taxes stay down, so the way to do that is you have to make sure you have commerce. So let’s keep the businesses here, and let’s try to make that grow instead of increasing these property taxes where it’s not sustainable.”

“We need to clean it up,” Grady-Perovich said. “We need to have an exact policy in place as to what goes first. Do you apply first? Do you go to the Building Department first? We need the steps that these people can follow so as not to skip a step.” Grady-Perovich said throughout her current term she has repeatedly asked Village administration about formalizing the process.

She also expressed the need for the Village to be more consistent about enforcing professional licenses such as those granted to hair salons, nail salons, and other service businesses. Grady-Perovich raised questions about the Special Use permit granted to Health Foot Massage, for example, noting that not all employees were properly licensed at the time of the request.

A platform item for the Village Voice Party, as explained on their website, is to “establish an annual business license program to improve inspections and provide updated information on Village businesses.”

Another way to protect residents and businesses, says Smith, is through a continuing and evolving focus on public safety, especially in light of the recent carjackings in the Chicago area. Smith is an advocate for community policing in Lansing, which she says emphasizes residents’ roles in looking out for each other and noticing what’s going on in their neighborhoods. According to her, something as simple as starting a block club could help with public safety.

“We do need to get more people to be active in calling the police because one or two from a block is not enough, but if seven or eight from a block call for the same issue, then that response will be more of a priority,” she said.

Diversity on the Village Board

Current Village Trustee Saad Abbasy served as the only racial minority on the Village Board until Valencia was appointed last summer. Abbasy is Jordanian while Valencia is Latino.

Valencia expressed his desire to continue using his connections in the Latino community to benefit Lansing, saying, “As a Spanish speaker, I can help bridge communication gaps that may exist. I have spoken to many of our Hispanic business owners and want to continue to seek ways to incorporate their existing needs as well as potential new business owners into village economic planning.”

If elected, Smith would be the first Black trustee in Lansing’s history, a reality that is exciting for her given its historical significance, but also daunting for the same reason. She said public office often feels insider-friendly, and to be a part of the Village Board as a Black woman would be “a big deal.”

Smith does not want to make her race the primary issue of her campaign, however. “I don’t want to say [of myself], ‘Black person running!’” she said. “I am bringing value. I want to represent the growing population that’s in Lansing, and I have a duty and responsibility to show people that good government can happen.”

Lansing voters will have their first opportunity to vote when Early Voting opens on March 22. The closest Early Voting locations for Lansing residents are:

Election Day is April 6, and voters will then be required to to visit their own polling places. Polling places are determined by address. Voters can find their polling place using address-based search tools at the Cook County Clerk’s website: