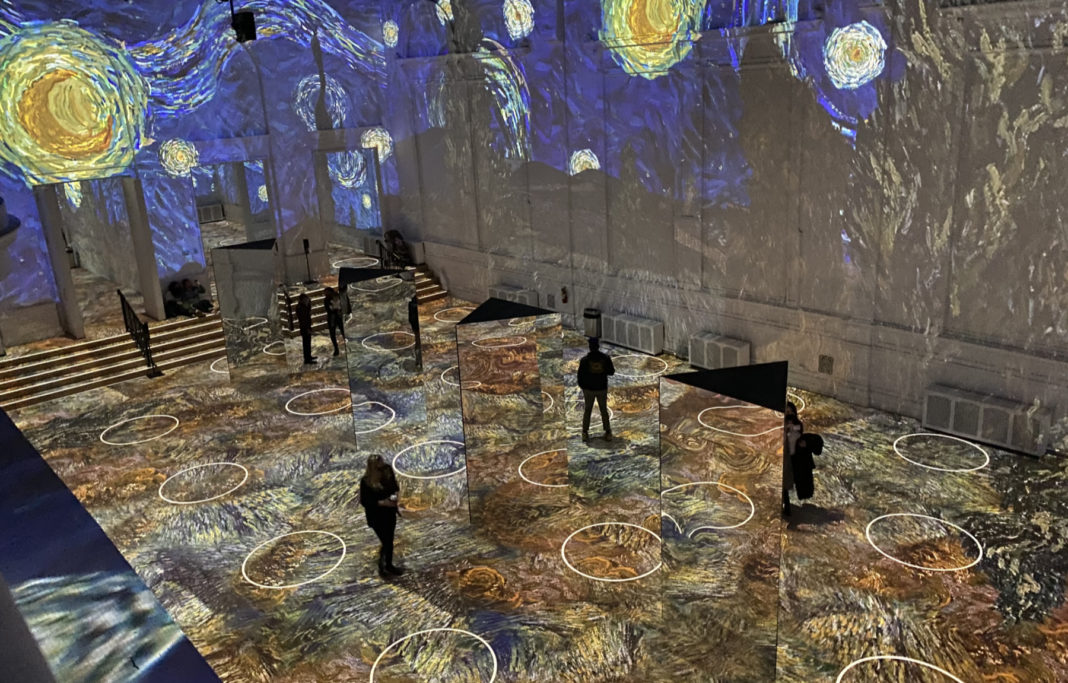 CHICAGO, Ill. (February 20, 2021) – There is a new immersive experience that just opened in Chicago that is different from what might first come to mind as art. It’s an exhibit that offers intense visuals coordinated with a carefully curated soundtrack that together comprise “Immersive Van Gogh Chicago.”

There was so much buzz in advance of its opening that it quickly sold out into early April before opening day. Its popularity caused organizers to extend the exhibit into September, move opening hours earlier, and offer Saturday afternoon VIP and Premium tickets for February and March. Tickets for spring and summer are selling quickly.

The Immersive Van Gogh Chicago exhibit has taken up occupancy at the newly-renovated Germania Club Building, an 1888 Chicago landmark in Old Town, in a new venue called Lighthouse ArtSpace Chicago. The exhibit fills three large rooms with 35-foot-tall walls and includes an upstairs balcony that gives visitors a birds-eye view.

Using projection technology, this presentation incorporates every bit of space into a canvas where Vincent Van Gogh’s most famous works come to life in front of viewers’ eyes. It’s like a beautifully-colored slideshow with perfectly timed music, but with images that rotate and spill out of the borders and expand in front of you. The 33-minute presentation that plays on a loop feels somewhat like virtual reality, but without the goggles.

This is the third opening of Immersive Van Gogh. It first opened in Paris in 2019 and debuted in Toronto last year. The Canadian exhibition was one of the few cultural events open at the time it welcomed its first visitors in July. It later pivoted to include the world’s first indoor drive-in exhibit. It was wildly popular, and both exhibits are slated to re-open there in the next month. Tickets also recently went on sale for an Immersive Van Gogh exhibition in Los Angeles.

Making the most of Van Gogh

Viewers don’t have to be familiar with Van Gogh’s work to enjoy the immersive exhibit. Images from his “Starry Night” piece or one of his self-portraits will likely be familiar to most. The timeless pieces from the late 19th century are brought to the forefront in a new way that allows patrons to take in the iconic works of the Dutch impressionist artist in a non-traditional way.

Attendees would do well to read up on the famous artist before going to the exhibit, as little biographical information is available. Van Gogh suffered from mental illness and cut off one of his own ears. He committed suicide at just 37 years of age, a poor and unknown artist who had sold only one painting in his life of the collection he had amassed of over 2,000.

As patrons make their way through the venue, there are floor markings to assist with social distancing. In the gallery rooms, circles indicate where to stand to remain six feet apart from others. Some mirrored props allow for camera phones to pick up selfies with a phenomenal backdrop. Viewers can walk through the exhibit but can also find a place to sit and enjoy the art.

The musical component, which is mostly instrumental, really takes the experience to the next level. The 15-song soundtrack is an eclectic mix of new and old. It opens with a haunting song called “Sing” by British record producer and songwriter Guy Sigsworth, transitions to some pieces recorded by Italian composer and pianist Luca Longobardi, and continues through melodies both high and low—from classical pieces by Handel to the 2019 release “Dawn Chorus” by Radiohead’s Thom York. The popular “Non, Je ne regrette rien” by French singer, songwriter, and actress Edith Piaf is part of the playlist, as is Bach’s “Cello Suite No. 1 in G Major.” The “Immersive Van Gogh Exhibit” playlist is available on some music streaming platforms.

Ticket sales are currently limited to about 30% of normal capacity, and tickets are in high demand. Prices start at $39.99 for adults and $24.99 for children 16 or younger with untimed and flexible ticket options. For more information visit vangoghchicago.com or call 844-307-4644. Follow @vangoghchicago on Facebook, Instagram, and Twitter.

Other art in Chicago

In addition to the new Van Gogh exhibit, there are other art venues that have re-opened or will return in the coming weeks. The Art Institute of Chicago re-opened on February 11 with two exhibits: “Monet and Chicago” and “Bisa Butler: Portraits.” Both exhibits have extended runs to account for the mandated closures. The Museum of Contemporary Art plans to re-open on March 2. Also, “The FRIENDS Experience,” an interactive space with 12 nostalgic rooms from the hit sitcom, will re-open March 17 and run through May 31. The exhibit, which has some interactive components, originally opened in October and was set to close in January, but its run was cut short due to mandatory pandemic closures so it will now stick around through May.