SPRINGFIELD, Ill. (February 11, 2021) – The Move Over Task Force, formed by Illinois Governor JB Pritzker in 2019, last week delivered a report detailing their study of the causes of Move Over crashes and violations and proposing ways to protect law enforcement, emergency responders, and all motorists.

The Move Over Law

The Move Over Law, also known as Scott’s Law, requires drivers to change lanes when approaching stationary emergency vehicles, including all highway maintenance vehicles displaying flashing lights, and any stationary vehicle with their hazard lights activated. The law also states, if changing lanes is not possible or unsafe, drivers are required to proceed with due caution, reduce the speed of the vehicle and leave a safe distance until they have safely passed the stationary vehicle.

“Our troopers and first responders put their lives on the line every single day in service to communities across Illinois. Ensuring these brave men and women are able to do their job safely and return home unharmed is a top priority for my administration which is why I created the Move Over Task Force in my first year in office,” said Governor JB Pritzker. “This report is an important step forward in our work to protect troopers and emergency responders on Illinois roadways and I applaud the members of the task force for establishing recommendations that will help make our roads safer.”

The task force was formed in the wake of the roadside deaths of two Illinois State Police Troopers Brooke Jones Storey and Christopher Lambert in 2019. The crashes were the result of motorists’ failure to comply with the Move Over law. Comprised of 17 members and chaired by Illinois State Police Director Brendan F. Kelly, the task force met five times throughout 2020 to find ways to educate drivers, promote compliance and prevent further tragedies.

Move Over innovations and statistics

The Move Over Task Force also investigated crash-avoidance technology, including systems that notify drivers by way of an alert that they are approaching an emergency vehicle on the shoulder, allowing more time to slow down and move over earlier. The ISP began the implementation of technology to reduce the amount of time that ISP officers spend on the roadside working crashes, conducting inspections and traffic stops. The ISP also announced new squad cars will now have push bumpers to help remove traffic obstructing vehicles from roads where possible.

During a global pandemic with stay-at-home orders and an altered mission for the ISP, state police issued 2,046 citations and 2,102 written warnings statewide for Move Over violations in 2020.  There were 29 squad car crashes, with 15 of those related to Move Over Violations in 2020. Two of those crashes occurred on the same day – May 23, 2020 – one in Cook County and the other in Will County. Both officers survived, although one sustained serious injuries. 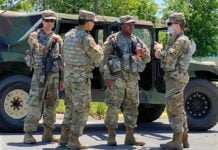