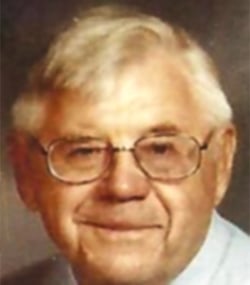 Due to the COVID-19 pandemic, a private family service will be held at Bethel Christian Reformed Church, Lansing, Illinois. Mr. Van Drunen will be laid to rest at Abraham Lincoln National Cemetery, Elwood, Illinois. Family and friends are in invited to view the service via live streaming, by going to youtube.com under Schroeder-Lauer Funeral Home, services will begin at 11:00am.

Milton graduated from T.F. North High School in 1943 on a Friday and enlisted in the Navy on the following Monday, serving proudly as a torpedo man on the submarine tender U.S.S. Sperry in the South Pacific. His years of hard work included working at Boonstra’s Poultry Store and over 40 years of roofing with Lange Roofing.

Milton was a loving friend to many, known for his jokes, quips, songs, and stories. He truly loved his family and loved spending time with them. In his spare time he found joy in gardening and fishing, when he got a chance. He was a faithful member of New Hope Christian Reformed Church and daily modeled his faith to everyone he met. Milton was loved by many, and he will be truly missed. In lieu of flowers memorial donations may be made in Milton’s name to the Christian School of your choice. Schroeder-Lauer Funeral Home has been entrusted with Milton’s care.