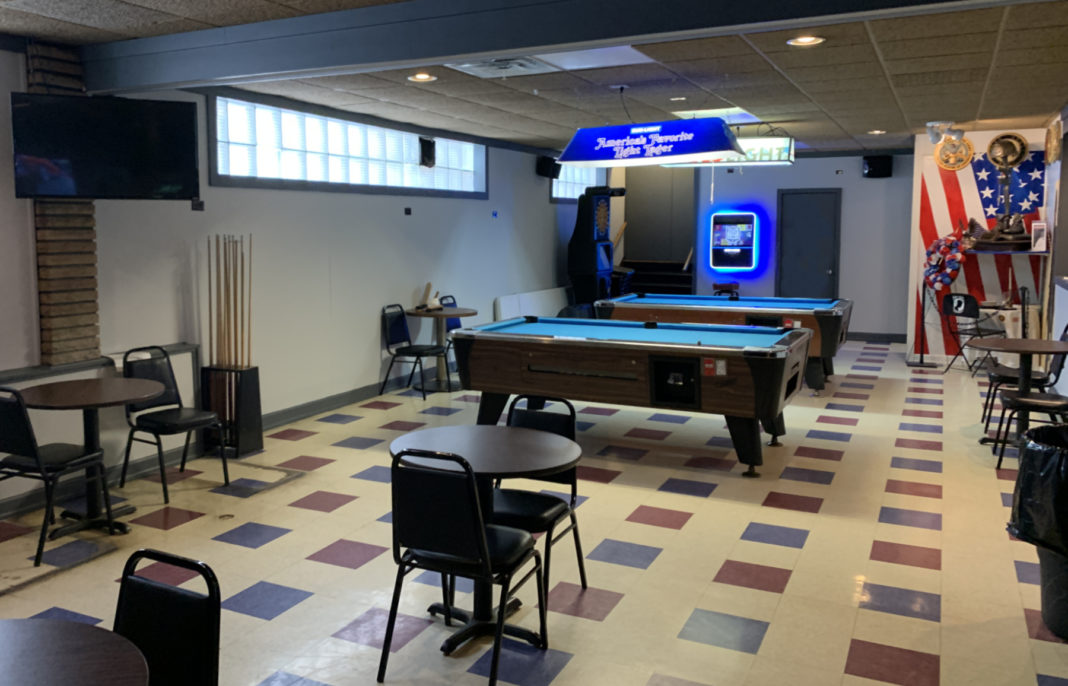 New, brighter space is open to everyone

LANSING, Ill. (February 1, 2021) – As Lansing moves to Phase 4 COVID restrictions, which allow for restaurants and bars to open for indoor dining, an updated look is welcoming loyal patrons of the American Legion bar, the result of months of planning and work.

The American Legion in Lansing is located at 18255 Grant Street. The building houses a bar in its basement that has served veterans and others for decades. Although located in the Legion building, the bar is open to the public and serves a wide variety of drinks and limited snacks.

One of the most striking features of the remodel is the light that now shines into the bar area through the previously-covered glass block windows. The windows were obscured by paneling that went all the way to the ceiling, said Legionnaire John Odom. Odom is part of the House Committee for the Legion and is responsible for maintaining and improving the indoor facilities. He oversaw a team that did the remodeling work. The Legion Riders donated $5,000 for the project, Odom explained.

Odom attributes the overall lighter atmosphere to the now-exposed windows. “It’s all this,” he said as he gestured to the glass blocks.

The walls on the west wall of the bar, as well as the hallway leading to the eastern entrance have been replaced with drywall painted a neutral gray. New, larger televisions have also been installed throughout the bar area.

Returning visitors will also notice a stark change in the available seating in the Legion basement. Booths along the west wall of the building have been removed and replaced with tables, both tall and standard height. Odom said the lack of booths, which were a muted brown color, brightens up the space and allows for more functionality.

There is one booth that has a railing attached to it that is has been left, as well as one near the southern entrance to the bar, of which Odom said, “It fit so perfect I said, ‘Alright, I’ll leave it.'” He said he would look into getting the booths reupholstered “to sort of blend in with the feng shui” of the face-lifted space.

Some of the the high tables now in the seating area are from the Lansing Country Club, which closed its doors for good in January.

A roughly 15-foot stretch of wall near the pool tables is planned to be transformed into a mural depicting all the wars the United States has fought in. Odom said local artist Seamus McLaughlin will paint the mural. McLaughlin has made art for various purposes in Lansing before, including statues at the Legion and the Lansing Veterans Memorial near the Ford Hangar.

Odom said the future mural wall, which now has windows above it, is the part of the overall project he is most proud of.

A ten-year Legionnaire, Odom is well aware of many of the traditions and customs at the Legion post, some of which he was confronted with during the remodel. Photos of past Commanders, for example, lined the paneled walls prior to the remodel, and Odom has been asked if those photos will return to the wall. His planned answer is to use a television to display the photos in a slideshow.

Given the many people who use and appreciate the Legion facilities, Odom said he’s encountered differing opinions. He has tried to do what’s best for the space while respecting tradition. “It’s the American Legion. There’s going to be some complaints,” he said with a wry smile.

Most recent step in improvement plan

Odom said the basement remodel is the most recent in a series of ongoing improvements the Legion has made. Roughly six years ago, Odom oversaw the re-doing of the bar surface itself. Two years ago, he said, the another member of the House Committee oversaw the replacement of concrete around the entrances of the building, as well as the addition of brick paving and a wooden backstop for the horseshoes area.

The next project on the horizon is the back of the bar, Odom said. He hopes to replace the cabinets and remodel the area behind the bar.

American Legion membership is for service members, old and young alike. But the bar at the American Legion is for anyone. As Lansing enters Phase 4 of IL COVID restrictions and the virus forecast appears to be brighter in the coming months, Odom hopes the remodel will bring even more patrons to the Legion to share a drink or watch a game.

“It’s not the Taj Mahal, but it’s a hell of a lot nicer. It’s a big difference—a big improvement,” he said.

American Legion Post 697 is located at 18255 Grant Street in Lansing. The bar is located in the bottom floor of the building.