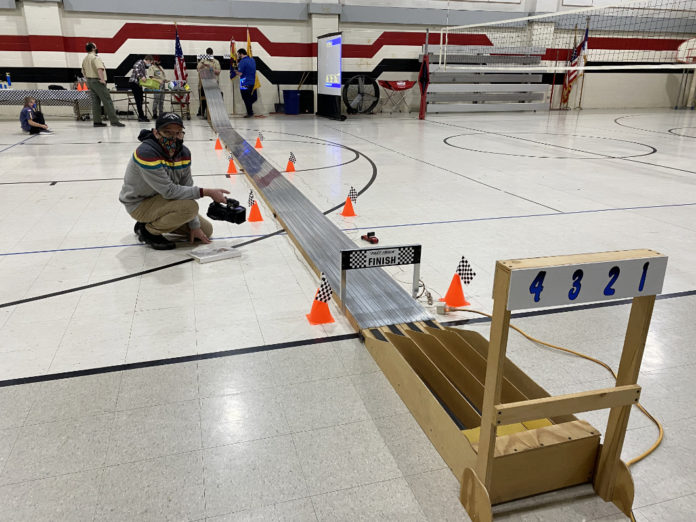 LANSING, Ill. (February 1, 2021) – For nearly seven decades Cub Scout packs around the country have been holding an annual pinewood derby—a racing event of small, unpowered, customized cars made from kits. Starting with a block of wood, four plastic wheels and four nails, scouts design their own race cars with the help of an adult. The pack then gets together for the annual derby event to test the cars to see which ones are the fastest. Packs may also give other awards at their events for the best design or most creative, or—in jest—for the slowest car of the day.

While large gatherings remain restricted as the pandemic continues, the leadership of two Lansing Cub Scout packs got creative and decided that rather than canceling the event, they would find a way for it to go on, but with some adjustments. Rather than filling the gym with scouts and families, leaders from the packs organized the event in the gym at St. John’s Lutheran Church and scouts were able to view it via Zoom on Saturday, January 30.

Cub Scout Pack 526, which is chartered by Lansing American Legion Post 697 and meets at Reavis School, and Cub Scout Pack 247 from St. Ann School joined together for a Virtual Pinewood Derby. A four-car track was brought to the gym at St. John’s Lutheran Church in Lansing on Friday night for set-up. While work was being done to prepare inside, a small number of scouting volunteers offered a no-contact, drive-thru drop-off of pinewood derby cars.

In a normal derby season, a clinic is set up in advance of the race for scouts who need help cutting the wood to design their car. Instead of an in-person clinic, a drive-thru clinic was organized. Scouts who couldn’t cut the wood at home brought their design drawing and representatives from each pack, Paul Kolarczyk from Pack 526, and Paul Scheppe from Pack 247, cut out the cars while parents and scouts waited outside in their cars.

A history of pinewood derby cooperation

About six years ago, the two packs started working together on the Pinewood Derby held in St. Ann School’s basement, said Pack 247 Cub Master Karie Breitenreiter. St. Ann’s pack would hold their event in the morning before making the track available to Pack 526 in the afternoon. This year, due to a decrease in scout numbers, both pakcs raced together. “Our group is down to 11,” said Breienreiter. That’s less than half of the scouts the pack had the previous year.

“A lot of kids did not come back to the pack this year because of the pandemic. For the kids who have stuck it out, we didn’t want to let them down and cancel the derby,” said Breitenreiter.

Last summer and fall,  Breitenreiter said there were a few outdoor meetings at parks, but since it’s gotten colder, all activities are being done via Zoom. Cub Scout Pack 526 Committee Chairman Maria Carbrera reached out to Bretenreiter recently about working on a virtual version of their annual derby.

“They can’t miss out on this”

“I was so sad for the scouts. I thought ‘they can’t miss out on this,’” Cabrera said. “It’s a big event they look forward to every year. We had to figure out a way to do this. We didn’t want kids to miss out on the experience. We knew it wouldn’t be like it was, but we wanted to have something.”

Pack 526 Cub Master Paul Kolarczyk served as emcee, calling out the names of winners as they appeared on a board that wasn’t visible to the scouts watching on Zoom. Kevin Ranos, Scout Master for Troop 276, was the camera man for the live stream. LNN—the Village of Lansing’s media entity—also recorded parts of the race. A software program designed by Pack 247’s Paul Scheppe has been used by the pack for several years to register and record times. A small number of scouts from Troops 219 in Munster and 267 in Lansing assisted at the derby with placing and retrieving cars.

Because St. Ann School is currently holding in-person classes and extensive cleaning of the facility is required, the school wasn’t able to accommodate the scouts for the pinewood derby, but St. John’s Church officials were willing to make the gym available to the scout packs. St. John’s School closed at the end of the 2018-2019 school year.

“It was a very new experience without the scouts being there,” said Kolarczyk. “It just had a different overall feeling.”

Although the large gathering and the concession stand were missed, Breitenreiter said she thought it was a success. “I think we did well with doing it virtually. The kids who did participate really enjoyed it.”

The award winners of Saturday’s inter-pack pinewood derby are listed below: