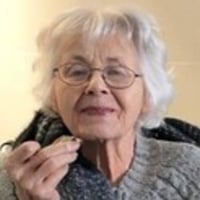 Ann Stamper (nee Dasovich), age 91 and formerly of Lansing, IL, passed over peacefully on Monday, December 28, 2020 in Munster, IN. She was born on December 19, 1929 to John and Maria Dasovich in South Porcupine, Ontario, Canada. On August 29, 1948, she married her love and husband, Peter John Stamper, and moved to Chicago. Peter preceded her in death in 2009. They were married 61 years.

Music was Ann’s passion. In her younger days she played guitar and loved to sing with her daughters. Later, she loved attending any musical venue. She spent many days in her kitchen baking and cooking, and was the queen of improvisation. Without sophisticated kitchen utensils, she always found a way to get the results she wanted, which was very humorous at times.

For a period of time, Ann served the Village of Lansing as a crossing guard and took great delight in interacting with the children. Ann loved nature and was a dreamer. She was a beautiful woman who was kind to everyone. She will be forever in our hearts. All services will be private. Schroeder-Lauer Funeral Home has been entrusted with Ann’s care.

Ann’s daughters would like to say a special thank you to her compassionate caregivers at Hartsfield Village in Munster, IN.