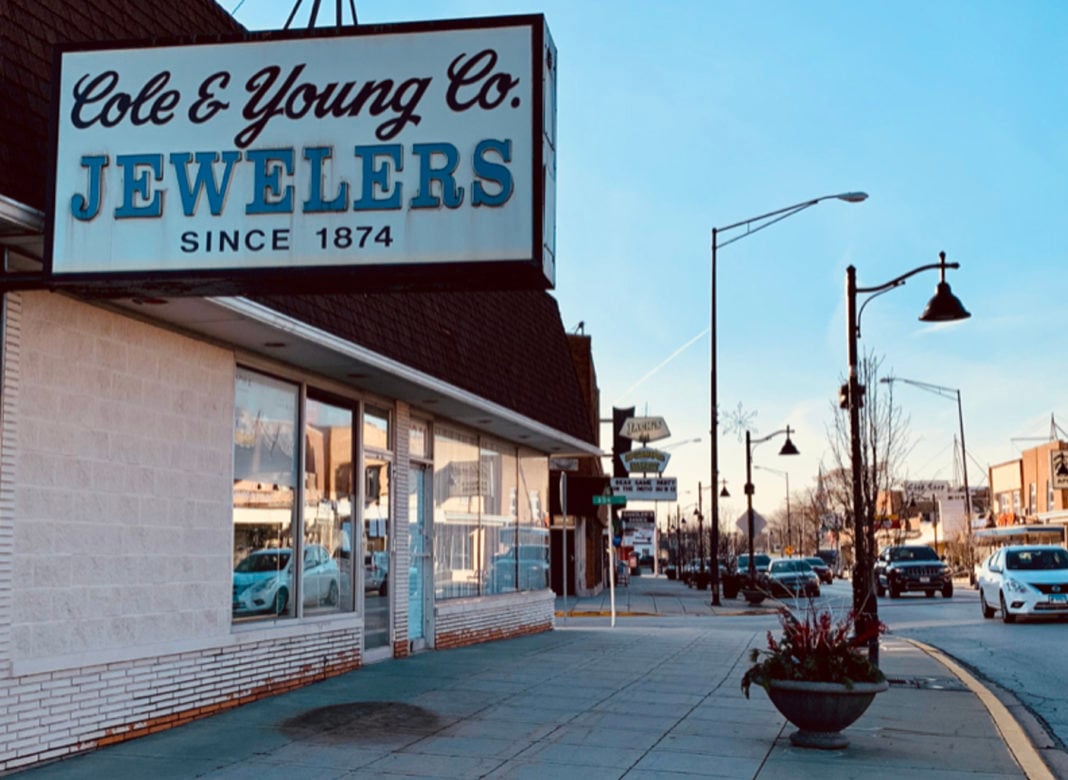 Owner Larry Mollo ready for retirement after 44 years in Lansing

LANSING, Ill. (December 22, 2020) – Soon after the first of the New Year, Larry Mollo plans to close his Lansing business—Cole & Young Co. Jewelers—located at 3341 Ridge Road. Mollo has been operating Cole & Young at the Lansing location since September 7, 1976. This permanent closing will not only mark the beginning of Mollo’s retirement after 47 years in the jewelry business, but will also conclude a Cole & Young proprietorship lineage that began 146 years ago with founding owner and namesake jeweler Warren Cole.

Mollo would have preferred to stay open another four years to mark and celebrate 150 years of continuous business, but current economic factors make that all but impossible. Mollo explains: “This is a perfect storm for a business closing—Amazon, pandemic, recession…” He also mentioned “crazy-high taxes” as a factor.

After 47 years, Mollo is ready for retirement. “I’m 68 years old. Worked six days a week since 1968. I’m done,” he said. In retirement, he and his wife Barb plan to visit their son Lonnie, who is a doctor in Minneapolis, their daughter-in-law, and their three-year-old granddaughter Lucy.

Mollo has already begun a soft closing, keeping Cole & Young open Wednesdays, Fridays, and Saturdays only. He currently is running a “Going-out-of-business” sale.

The following timeline features highlights of Cole and Young’s local history in Crown Point, IN; South Chicago; and Lansing from 1874 to present.

“A new brick block will be erected on the ‘Goulding corner’ next spring. Mr. F. Goulding, Mr. W. Cole, and the First National Bank being the builders. We hope Mr. Sauerman and the other property owners east of him will also conclude to build at the same time, and that Mrs. Fraas will also erect a building on the Schlemmer corner, and then we will have an unbroken row of brick stores on the east side of the public square. Enterprise, gentlemen!”

“Warren Cole, the jeweler has not made up his mind to go to South Chicago, or to Portland, Oregon. The fact is he rather expects to stay in Crown Point, where he is doing a safe business. The REGISTER last week said that Mr. Cole had leased his store rooms; but he had not. The bargain talked of was conditional, and as the matter now stands he will remain where he is and has been.”

Rumors of relocation, however, apparently carry some truth as the Register announces two months later on November 7, 1889:

“It was reported on Monday that Warren Cole, the jeweler, has sold his business house on Main street to Eder Bros. for $7,000. The papers had not been signed on Tuesday. Mr. Cole went to South Chicago to look at some property there to invest his money in, provided the chances seem favorable. He will not leave Crown Point for the present, even should he sell here and invest in some other place.”

“Cole and Young Jewelers at 9144 Commercial avenue, have already broken ground for Improvements to their building. A second story will be added together with the floor space in the rear.”

“I used to sell stuff out of the trunk of my car when I was in high school, and one day I was at the Steel City Bank, running an errand for my father—who was always in business—and the President of the bank came up to me with an older gentleman, and says—he called me by my nickname Lonnie—he says, ‘Lonnie, why don’t you buy Charlie’s store?’ he says, ‘—Cole and Young.’ Cole and Young!…I pull my pockets out, I say, ‘This is why I can’t buy it.’  He says, ‘No, we’ll take care of that.’ So a couple of weeks later I own the business. I was still twenty years old. I was just a local kid and they always saw me working and running errands. I learned so much from the old-timers that were in business for years. We’d go to lunch and it was like going to class. They’d tell you how to handle situations, and it was just remarkable. Now, people don’t even want to talk to one another. A local lawyer Ron Buoscio … told the owner, ‘Give him the keys. You’ll have your money next Wednesday.’”

Reminiscing on his years in Lansing, Mollo fondly recalls Lansing people he would see passing by or regulars who would stop in. Among his friends, he recalls former White Sox and Cubs pitcher Steve Trout, who had lived in Lansing, and would often come to visit, and many current and former Lansing business owners with whom he still has contact. He also will miss a couple of ‘jobbers’ that have come in every day for 44 years. He contends the best part of the job is the people. “Am I the richest jeweler in the world? No,” Mollo acknowledges,  “But am I the happiest?  Quite possibly.”

Sources cited in this article were accessed from NewspaperARCHIVE.com