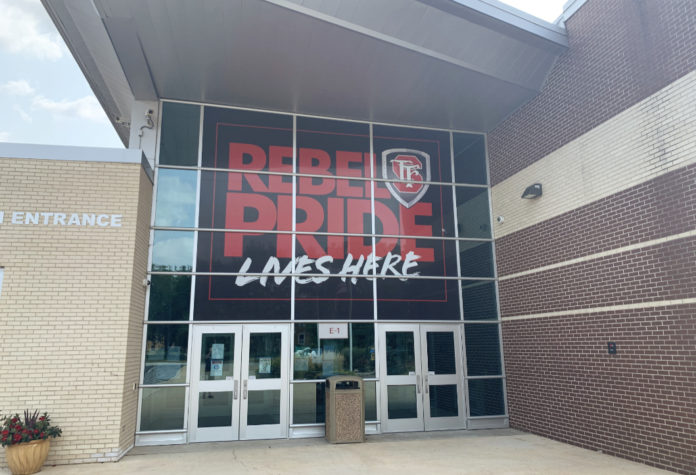 LANSING, Ill. (October 21, 2020) – On August 25, the District 215 School Board voted unanimously to dissolve the TF South nickname “Rebels.” This week, students begin a process to choose to a new nickname for the school.

In its August 25 resolution, the school board stated it was “committed to an overall culture of equity with the guiding principle of learning environments that are welcoming, positive and inclusive, where all students and stakeholders feel a sense of belonging and purpose in school.” It also acknowledged the nickname “Rebels” was a reference to the Confederacy and notes that “imagery associated with the Confederacy has racist connotations.”

TF South Principal Jake Gourley presented his vision for a renaming process before the 215 Board on September 9, a process that was largely met with positive reactions during the meeting.

The renaming process begins this week as students from the TF South (TFS) Activity Executive Board and the Captains’ Club form a commission to meet and discuss potential school nicknames. According to the process proposal Gourley gave to the 215 Board, the students will “meet virtually via Zoom to establish norms and to discuss, propose, and evaluate potential school nicknames. Each member will be expected to reach out to his/her ‘constituents’ in a democratic manner.”

Gourley explained that the students involved in these discussions have been elected by their teams or clubs to be representatives on the Activity Executive Board or Captains’ Club, which means they are already a good representation of much of the student body.

The student renaming commission will first work to create a list of four potential school nicknames and present those to the student body for a vote, with a “none of the above” option also available. The top three vote getters will then be voted on again by the student body. A third and final election will be held to choose between the final two names. Gourley will then make a recommendation to the board based on the results of the final round of voting. Additional procedures may be necessary if “none of the above” is a popular and consistent choice among students.

“I think this is their time to make that choice, ultimately,” Gourley said of TFS students.

“I anticipate this will unfold over the course of this school year, with a new nickname to be adopted in time for Fall, 2021,” Gourley said. He said the 2021-2022 school year will be a year of transition as new signage, uniforms, and other nickname-dependent materials are phased in. The school has already taken steps to remove “Rebels” references, and will continue that process.

More than a name

At the September 9 District 215 meeting, Gourley mentioned that he and other administrators will be present during student discussions, and will encourage students to consider names that have meaning to TFS and the community it serves, rather than a nickname they personally like. He said he wants students to “come back and propose a rationale for ‘I think this name is good’ … and in ties in somehow with who we are.”

The board and Gourley briefly discussed if alumni should be brought into renaming conversations. The consensus seemed to be that although TFS alumni are welcome to share their thoughts on what the school nickname should be, the decisions and conversations regarding the new name will be student-driven.