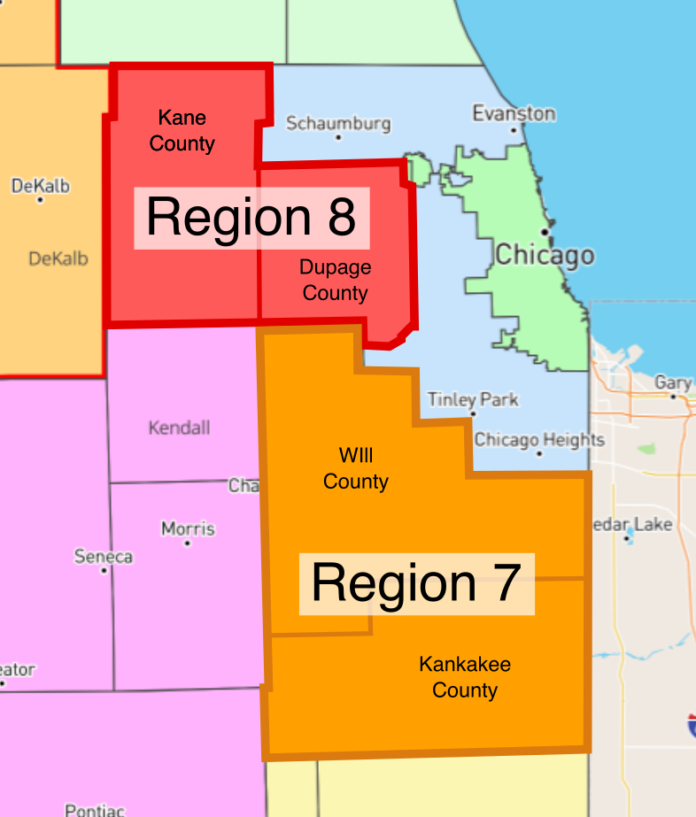 No indoor seating at restaurants and bars, with limits on gatherings of 25 or more

Information provided by the Office of the Governor

ELGIN, Ill. (October 20, 2020) – Governor Pritzker and the Illinois Department of Public Health (IDPH) announced COVID-19 resurgence mitigations will be implemented in Region 7 (Will and Kankakee counties) and Region 8 (Kane and DuPage counties), beginning at 12:01 a.m. on Friday, October 23, 2020. Both regions are seeing a 7-day rolling average test positivity rate of 8 percent or above for three consecutive days, which exceeds the threshold set for establishing mitigation measures under the state’s Restore Illinois Resurgence Plan.

“By the end of this week, four regions will all be operating under the standard resurgence mitigations – that includes no indoor dining or indoor bar service and limiting in-person gatherings to no more than 25 individuals,” said Governor JB Pritzker. “As colder weather approaches and flu season is upon us, we’re going to see the rippling effects of these current unfortunate trends. The massive surge of cases in our neighboring states will continue to have a spillover effect. There is no easy fix for the effects of this virus on our economy and our public health. But we can and will manage through this. We’re Midwestern tough here in Illinois. We know how to deal with a crisis. And we know how to take care of each other.”

These mitigations do not currently apply to schools.

On October 19, the Pritzker administration announced COVID-19 resurgence mitigations will be implemented in Region 5, in Southern Illinois, beginning October 22. Region 1, in Northwestern Illinois, has been operating under tightened mitigations since October 3 and the region has continued to see test positivity climb at a consistent pace. Including Regions 7 and 8, four of the 11 public health regions have now triggered the state’s failsafe state-action metric.

This marks the second time that Region 7 has surpassed the threshold set for establishing additional resurgence mitigation measures. The state initially implemented additional mitigations in Region 7 on August 26. The region was able to return to Phase 4 of the Restore Illinois Plan on September 18, following weeks of close coordination between IDPH and local health departments, as well as a concerted effort by community leaders and residents. Now, in addition to a test positivity rate of above 8% for three consecutive days, Region 7 is also experiencing concerning ICU availability.

As part of the administration’s response to the pandemic, the state continues to strengthen its testing operation. Illinois is now averaging over 65,000 tests per day, which is well above three times the testing than the average state. Testing is readily available throughout the state, as it remains a critical step to reduce the spread of the virus, given that a positive test result begins the contact tracing process to prevent further spread in Illinois’ communities.

In addition to testing, IDPH continues to actively monitor every region in the state for several key indicators to identify early, but significant increases of COVID-19 transmission, potentially signifying resurgence. Indictors include an increase in a region’s positivity rate with a simultaneous increase in either hospital admissions for COVID-like-illness or a decrease in hospital capacity, or three consecutive days of greater than or equal to 8% test positivity rate (7-day rolling average). These indicators can be used to determine whether additional community mitigation interventions are needed for a region to prevent the further spread.

A full list of mitigation measures pertaining to some businesses and industries may be found on the DCEO website here.