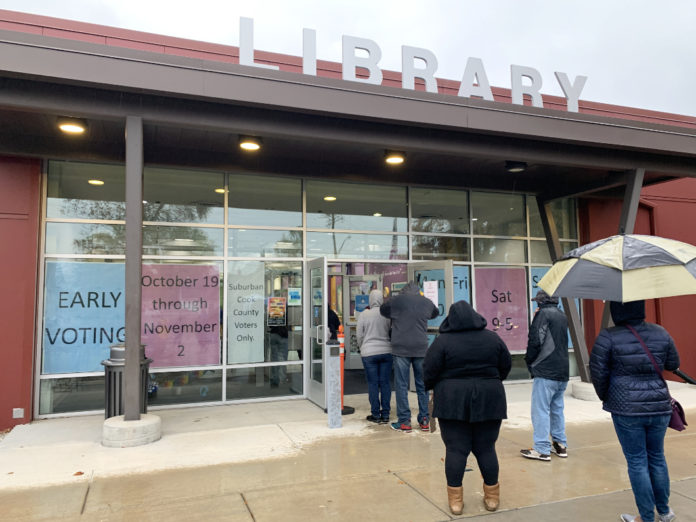 By Josh Bootsma, with information provided by the Lansing Public Library

LANSING, Ill. (October 19, 2020) – Monday marked the first day of early voting at the Lansing Public Library for the November 3 election and, true to form, it drew a large—though socially distant—crowd.

Voting in a pandemic

Although early voting is not a new way to vote for many Lansing residents, it has become an even more attractive alternative to election day voting in light of the COVID-19 pandemic. As voters seek to avoid being part of a large crowd on election day and risking exposure to the virus, many are opting to vote early or vote by mail.

Lansing resident Joyce Smith usually votes by mail but does not usually come on the first day. She came on the first day this year to ensure her vote is cast. “Because of the pandemic, I don’t know what’s going to happen. I didn’t want them to shut everything down and I couldn’t vote,” she said.

Smith said she started standing in the voting line around 2:20 p.m. She walked out of the building at around 5:15 p.m. When she first arrived, the weather was fairly clear, but by the time she made it indoors, it had started to rain lightly. Though tired and a bit wet, she was happy to have cast her ballot. “I feel great. I voted, you know, that’s the main thing,” she said.

To limit interpersonal interaction, only 20 people are allowed to wait to vote inside the building, with any additional voters waiting outside. According to library staff, some voters started to line up hours before early voting hours started at 8:30 a.m.

Angela Williams said she first came earlier in the day and saw that the line was too long. The six-year Lansing resident returned in the late afternoon with a lawn chair and waited in the slightly-shorter line. She used the chair to take a break from standing and check her email during her wait. As she was standing just in front of the library, having been in line for a little over an hour, she was impressed with how quickly things were moving. “I expected to be here a little longer than I have been … It’s moving very well. Very very well. They’re doing a great job,” she said.

“I always vote,” Williams said, “I don’t always vote early. … I just wanted to make sure my vote was counted. I just think it’s an important election.”

Shortly after 5 p.m., the line had about 75 people in it. The Cook County Clerk website has an estimated wait time viewer for all early voting locations, including the Lansing Public Library.

A Mail Ballot Drop Box is also available at the Library, and is open only during Early Voting Hours. This box provides a way to submit in mail-in ballots without sending them in the mail.

Early voters can vote at the library through Monday, November 2 during the following times:

The Lansing Public Library is located at 2750 Indiana Avenue in Lansing, Illinois.