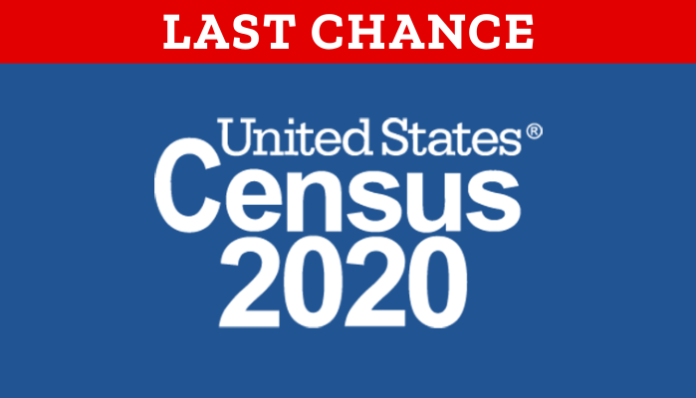 LANSING, Ill. (October 15, 2020) – Today (Thursday, October 15) is the final day to participate in the 2020 Census. Despite attempts to extend the deadline of the decennial count to the end of the month, the U.S. Supreme Court ruled on Tuesday in favor of the Trump administration’s efforts to end Census operations as soon as possible to allow for the results to be fully counted and submitted by the year’s end.

The Census Bureau said all internet Census responses must be submitted by 4:59 a.m. (Central Daylight Time) on Friday morning. This allows Census-takers in Hawaii to take the Census until 11:59 p.m. (Hawaii Standard Time) tonight.

Paper responses must be postmarked no later than today.

Census information is used to determine funding for programs and services at a local level. “Billions of dollars in federal funding are distributed to communities across the country based on the statistics from our Census,” Lansing Village Clerk Vivian Payne said in September. “Under-counted communities will lose millions of dollars over a 10-year period for important programs and infrastructure such as new roads, school funding, low-income housing, and healthcare and emergency services.”

“If you care about the community you live in and you want to see the Village of Lansing continue to thrive, you should complete the 2020 Census. Your response is completely confidential, and the U.S. Census Bureau cannot share your information with any other governmental agency,” Payne said.