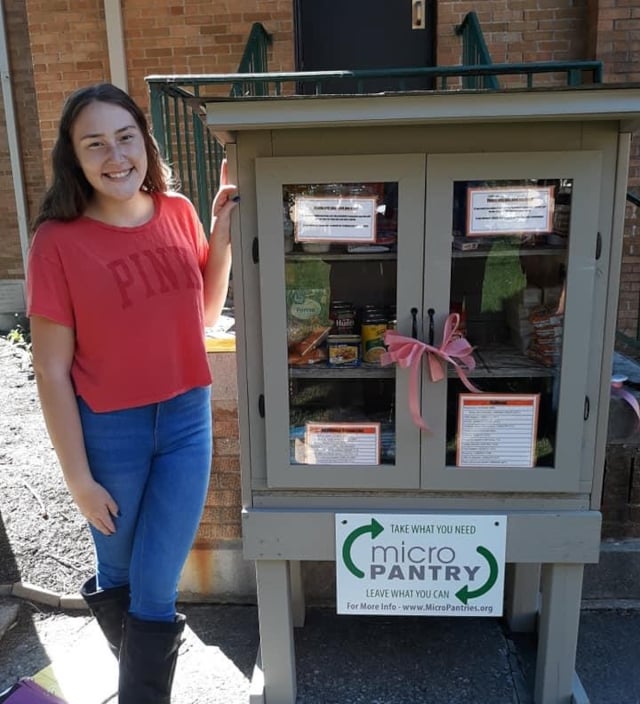 LANSING, Ill. (October 10, 2020) – Lansing now has a second micro pantry, thanks to 16-year-old Lansing resident Korey Ziemkowski. The new pantry is located at First United Methodist Church and ready to serve those in need.

“Everything just fell into place,” Ziemkowski said, “with COVID happening and not being able to be in direct contact with people, this a way that people can still help one another, but not be in the same room as them and not be exposed to anything.”

A few years ago, Ziemkowski had noticed a micro pantry in another community and the idea piqued her interest. She and her family began donating to one in Hammond, IN and started thinking about how to bring one to Lansing. It wasn’t until the We Are Lansing Food Drive on Aug. 29 that the project began to take shape, when Ziemkowski spoke with Pastor Dave of First United Methodist Church about it.

“I had asked him about it and he loved the idea,” Ziemkowski said. “Then I talked to the [church’s] board members and got it all set up … I found out that we do have a church in town that loved the idea as much as we did and would be willing to help us in any way we needed.”

Ziemkowski said after her talk with Pastor Price, she spoke with First United Methodist Church’s treasurer, Robert Wood. “He knew he had to talk to everyone else on the board just to ‘OK’ it,” Ziemkowski said. “I woke up the next day and I already had an email in my inbox from earlier that morning and they had met at like 7 a.m. and they had already agreed unanimously that it was a good idea.”

The Lansing resident then reached out to The Guardian Group, a nonprofit based in Joliet that builds micro pantries in locations in northern Illinois. The organization arranged to set up the micro pantry on Thursday, Oct. 8.

The pantry was stocked as part of the setup process, Ziemkowski said, but keeping it stocked in the future is up to the Lansing community, which she doesn’t think will be a problem. “I have gotten so many donations. My basement right now, it looks like a grocery store, there is so much food ready to go,” she said.

A pantry for all people

Ziemkowski said she will be able to keep an eye on the micro pantry before or after her school day at T.F. South, where she’s currently a junior, though she’ll have to make separate trips for the time being, as the school is currently online.

The micro pantry is located by the church’s Burnham-facing entrances, making it visible from the street. Ziemkowski stressed that the pantry is not only for food items, but also for other necessities like diapers, toiletries, hygiene products, and more. “I wanted to make it not just food—that was our goal—to make it anything that people could need,” she said.

Generosity is not a new trait to the Ziemkowski family, who hosts an annual toy drive around the holidays and is involved in the Lansing Association for Community Events (LACE). Ziemkowski has been a part of Girl Scout Troup 10092 since kindergarten.

She said after meeting Pastor Price at the food drive on Aug. 29, she called her mom to make sure she was onboard with the micro pantry. “Yes, absolutely!” was her response.

“Both [my parents] have been supportive with anything I say. I think I could say ‘I want to donate a million dollars’ and they would find a way to make it happen,” Ziemkowski said.

Community involvement is something anyone can be a part of, says the Lansing teenager, and she recommends it. “You don’t need any recognition but it makes you feel great as a person to help and let other people know you’re there for them. … I’ve learned so much about myself and what I can do to help people, and I’ve met some really amazing people that have changed the way I look at life,” she said.

The micro pantry is located at First United Methodist Church (18420 Burnham Ave.) in Lansing, with anonymous donations and pick-ups available at all times.

“I can’t wait for more people to learn about it and be able to go there as much as they need to. I think this is such an amazing project and it’s such an easy way to help people at a distance—especially during COVID,” Ziemkowski said.