We write to address the following Facebook post made on the Village of Lansing Page on September 24 at 10:06 a.m.:

“In light of the decision out of Louisville, Kentucky yesterday, the Village of Lansing is prepared to take action should any civil unrest potentially affect our community. The Village administration, Lansing Police Department, and the Lansing Public Works Department are all at the ready to take action if and when necessary. The Village has also been in contact with representatives from the offices of multiple elected officials at the regional and state levels who have offered their support and resources if needed. At this time, some barricades are in place at certain WalMart entrances strictly as a preventative measure.”

Presumably, this post refers to a decision made in Louisville not to charge the police officers who shot and killed Breonna Taylor, a young Black woman sleeping in her home. In short, the astounding insensitivity of your statement above has hurt, offended, and angered the Black residents of Lansing and their allies.

You choose to address the gross injustice done to Breonna Taylor as “the decision out of Louisville, Kentucky.” You choose not to #SayHerName, and this choice has been noted by your residents and voters.

When the decision was made to leave all officers responsible for Breonna’s death uncharged, the Black community of Lansing grieved. We still grieve. And the statement on Facebook made it painfully obvious that the administration of the Village of Lansing does not represent nor consider the interests or feelings of the many Black citizens you were elected to represent and serve.

Every time another high-profile act of violence and injustice is inflicted on a Black person, we are forced to grieve in a town where the Black community makes up a substantial percentage of the town’s population, yet the local leaders refuse to say, explicitly, that Black Lives Matter.

We are forced to grieve under an administration who had the perfect opportunity to appoint a qualified Black Trustee and chose not to do so.

We are forced to grieve under leadership that seems more concerned with commenting on the very small percentage of looters from other communities than with showing support for its Black citizens, who have been peaceful in their protests. In her nine-minute address to the community before the June 16 board meeting, Mayor Eidam spent nearly four minutes thanking police and criticizing looters. Mayor Eidam said in her address, “Lansing has been a direct victim of the ugliest aspects of this civil unrest” (the “ugliest aspects” being looters). However, we have also been a victim of the ugliest aspects of police brutality, if we recall 2017, when 15-year-old Jordan Brunson was attacked by an off-duty Lansing police officer, who currently serves on active duty.

How are we supposed to grieve knowing these things?

In her address to the community, the word “Black” did not leave Mayor Eidam’s mouth. The issue is not between “police and the public.” “The public” does not suffer from targeted and sanctioned police violence on a systemic level. The public does not walk the streets, terrified of being stopped and frisked. The public does not have to sit their children down and explain to them how to navigate interactions with police so they make it out alive.

We call on the leadership of Lansing to address the reality of the situation with authentic sensitivity. A large portion of your community grieves. As our leaders, you have done little, if anything, to express concern, compassion, or solidarity with us. The Black community of Lansing looks to you, our leadership, to clearly acknowledge your Black citizens, our concerns, our interests, and the importance of increased sensitivity moving forward.

We call on you to publicly address the Black community, affirm that Black Lives Matter, and express your intentions to improve Lansing’s interracial relations by implementing a citizen’s review board with the support of the Lansing Community Coalition and Concerned Citizens of Lansing.

The Lansing Community Coalition and the Concerned Citizens of Lansing are two separately organized groups. The Lansing Community Coalition was formed in August 2017 during the mediation process for the Memorandum of Understanding. President Elvis Slaughter says, “We are a diverse group representing Blacks, Whites, and Hispanics in the village of Lansing.” Roberto Mendoza is the Coalition’s Sergeant of Arms. 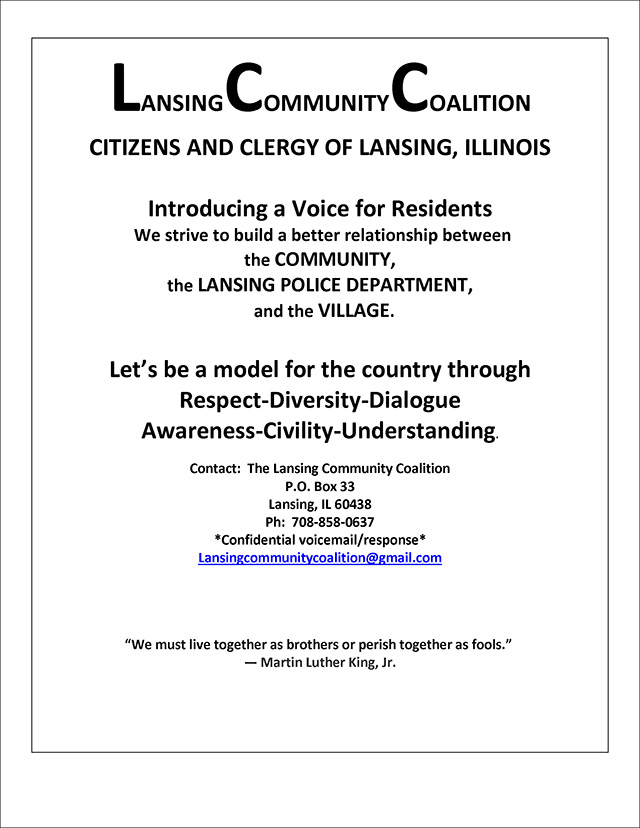 Local Voices: Why is the N-word allowed in schools?

Editorial Contest: Too close for comfort – a firsthand account of ‘white flight’ in Lansing