information provided by the Illinois Council on Responsible Fatherhood

I’ve been talking for decades about the value of fathers in the upbringing of their children. Too many children struggle if their father is absent.

I included this information in my first book Fathers’ Rights. But where did it come from? It came from the census.

The Census Bureau does more than just count people. It also conducts the American Community Survey, to compile demographic information that researchers can use to discover our social and economic problems, find the causes, and seek solutions. We do not want our communities, or any community, to be underrepresented in these reports.

The census was due to end today, but a federal judge ordered the census kept open until the end of October. My friend State Rep. LaShawn Ford put together an important event, supported by the Westside NAACP, at Columbus Park in Chicago, on Sunday to help the U.S. Census Bureau. I spoke, as did political and community figures. Ultimately, the census determines political representation, as well as the allocation of resources. We don’t want to get less than our fair share.

I urge fathers to fill out the census. Making sure that you and your children count is a gift that will last a decade, and it will have an impact on their opportunities in education, public safety, and job prospects. I know fathers are busy, but please take 10 minutes for yourself, your family, your community, and everyone’s future to complete this form. You can do it at 2020Census.gov.

The census is a crucial part of any effort to see that communities are properly represented. A community that has a high census response rate is a community that exists politically, socially, economically, and in academic research. For the good of our communities, please stand up and be counted, so you count.

The census response rate map is available for viewing by state, city, and township, and response rates to the 2010 census are provided for comparison. 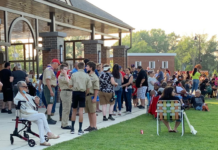 Lansing Police and residents unite for National Night Out