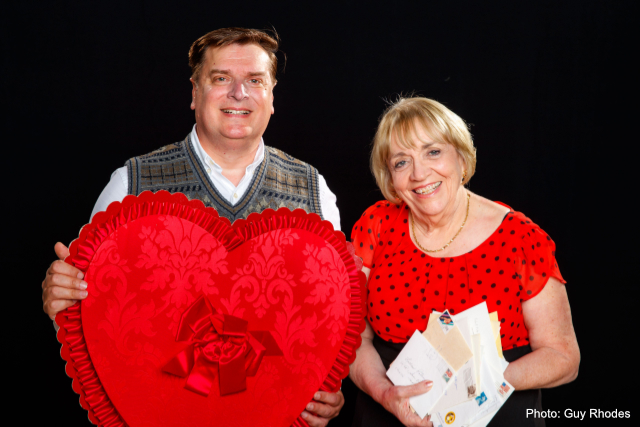 Information provided by the The Center for Visual and Performing Arts

MUNSTER, Ind. (September 21, 2020) – The Center for Visual and Performing Arts will showcase one exclusive performance of the Pulitzer Prize nominated play by A.R. Gurney “Love Letters” at 7 p.m. Friday, Oct. 2. This special production, under the artistic guidance of Steve Scott, will star Phil Potempa, noted newspaper columnist and author and Mary Beth Schultz, president and CEO of The Caring Place of NWI, which is the non-profit benefiting from the performance.

“Love Letters” shares the funny, passionate, and at times, sad tale about the overlapping lives and love of rebellious Melissa Gardner and buttoned-up Andrew Makepeace Ladd III, spanning their exchanged notes, cards, and letters during 50 years as they are read with the interplay of the two featured stars. The story timeline starts with second grade and details summer vacations, college life, and marriages, including children, happiness and heartache. “Love Letters” is a masterful and moving simple production premise, with an actor and actress comfortably seated on stage, delivering the riveting story of a complicated couple’s lifetime relationship spanning the late 1930s to the late 1970s.

The play opened off-Broadway in March 1989, starring Kathleen Turner and John Rubinstein. When the show transferred to Broadway in October of that year, it was with Lynn Redgrave, John Clark, and others. Touring productions have included Robert Wagner and his actress wife Jill St. John.

Throughout three decades, the play’s signature marquee draw has remained the same: changing the two-person cast for notable names to appear throughout the run. The last Broadway revival of A.R. Gurney’s “Love Letters” was in 2014 featuring paired star names like Brian Dennehy opposite Mia Farrow, and later, Carol Burnett; Alan Alda and Candice Bergen were also paired later in the show’s run. Most recently, Barbara Eden, of “I Dream of Jeannie” TV fame, at age 89, teamed with actor Barry Bostwick, 75, of “The Rocky Horror Picture Show” cult status, launched a touring production of “Love Letters” in early 2020.

As a non-profit social service organization serving the needs of domestic violence and sexual assault victims, The Caring Place primarily serves victims in Lake, Porter, and Starke counties in Northwest Indiana, but can also assist victims across the country. The organization provides services and shelter for victims of violence and their children and believes that through education and awareness it can empower community members to live in peace. In addition to safe shelter, The Caring Place provides community education, support groups, legal counseling, and independent living planning.

The 7 p.m., Friday, Oct. 2 performance is in the ballroom at The Center for Visual and Performing Arts, 1040 Ridge Road, in Munster. Doors open at 6 p.m. and a champagne reception with heavy hors d’oeuvres and dessert and coffee at intermission is included. The $75 ticket includes the performance with private table seating, with social distancing and mouth and nose covering mask requirement. Tickets are available through the PayPal link online at www.TheCaringPlaceNWI.org or call (219) 464-0840, Ext. 102.

The Center for Visual and Performing Arts is located at 1040 Ridge Road in Munster, Indiana.