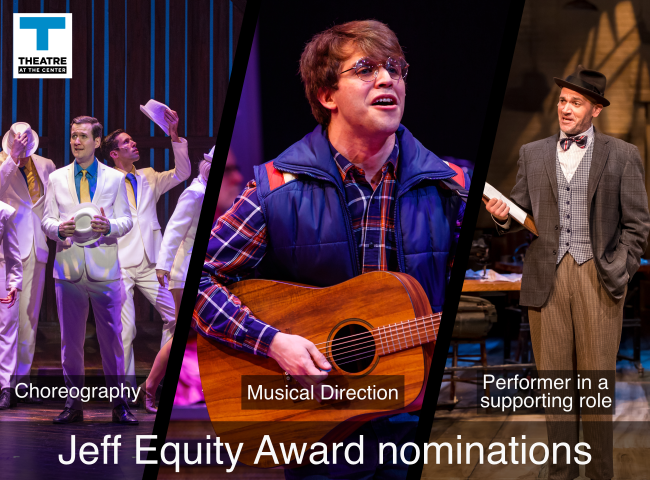 Information provided by Theatre at the Center

MUNSTER, Ind. (September 15, 2020) – Theatre at the Center (TATC), the resident theatre at The Center for Visual and Performing Arts, 1040 Ridge Road in Munster, received three Jeff Equity Award theatre nominations this week for mainstage productions featured in late 2019 and early 2020 at the Northwest Indiana stage space.

TATC Artistic Director Linda Fortunato is nominated for “Choreography” for White Christmas, which was featured as the 2019 holiday musical, and TATC Musical Director William Underwood is nominated for “Musical Direction” for Almost Heaven: John Denver’s America, the musical stage event in February and March 2020 which launched TATC’s 30th Anniversary Season. A nominee nod was also given to actor Jason Grimm for “Performer in a Supporting Role” for his fun portrayal of temperamental factory foreman Hines in The Pajama Game in Fall 2019.
The 52nd Annual Equity Awards Ceremony, usually hosted at Drury Lane Theatre in Oak Brook, will be hosted only as an online awards ceremony on Nov. 9.

The mission of TATC, which is a non-profit organization, continues as it brings disciplines of performing arts that are appealing, educational, and accessible to the community via The Center for Visual and Performing Arts. In most seasons, TATC’s five mainstage productions attract audiences of more than 60,000 annually. When calculated, 80 percent of TATC’s income goes directly to its mission, which is why, as with so many arts organizations, the year 2020 has been so devastating.

Earlier this month, Theatre at the Center, like so many theaters around Chicagoland, announced all remaining mainstage productions and concert events in the stage space have been canceled through the remainder of 2020. Ticketholder patrons with previously purchased tickets for canceled events, as well as season subscribers and anyone with account credits are being refunded automatically via Tickets.com. Credit card accounts of patrons were refunded on or around Sept. 10, and any patrons who paid by check or cash are being mailed issued check refunds. Patrons are asked to allow two weeks for mailed refund checks to arrive. For refund questions in the future or if a refund has yet to arrive after Oct. 1, please call the TATC box office at 219-836-3255 for a directive for assistance since the box office will not be staffed during this time, since all refunds are being processed off-site.

Over the course of a usual year, TATC, the only professional theatre in Northwest Indiana and which marked at 30th Anniversary in 2020, usually employs more than 150 actors, designers, directors, musicians, crew, and administrative staff as a force for economic strength for the greater Northwest Indiana community, both through meaningful work, training for young people in the theatre arts and technical production, and also participation in the local hospitality industry with our 60,000 annual patrons.

Theatre at the Center is located at 1040 Ridge Road in Munster, IN.