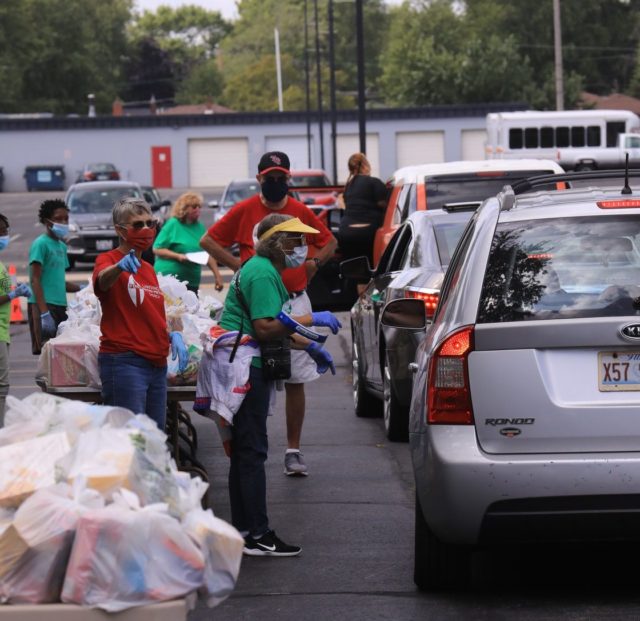 LANSING, Ill. (September 1, 2020) – In the hours leading up to noon on Saturday morning, cars began to line up on Burnham Avenue to get food from a Lansing drive-thru. But they weren’t waiting for a restaurant; they were waiting for the We Are Lansing Food Drive.

When noon came, cars began to slowly work their way down the line of nearly 40 volunteers in the First United Methodist Church (18420 Burnham Avenue) parking lot, where they received bags and boxes of assorted food items based on their need and family size. They also received masks, gloves, sanitizer, and personal hygiene items.

The food drive lasted from noon until 3 p.m. on Saturday, and was organized by Lansing resident Cam Sanchez.

Food for a community in need

“There’s always someone in a community that’s in need,” the 17-year old TF South senior said. He has been a part of food drives at Convoy of Hope, a worldwide nonprofit that has a location in Chicago. Sanchez has seen the value of the Convoy of Hope program in years past and said he wanted to bring something similar to the Lansing community.

Sanchez said that a significant portion of the food given away on Saturday was leftover from a Convoy of Hope food drive event the week before. “They had a surplus of stuff so I was like, ‘Hey, what are you guys going to do with this food?’ [They said,] ‘Some of it’s getting tossed, some of it is going back.’ So I said, ‘Load me up—I want to do something out in Lansing.'”

Other food donations came through connections that Lansing Human Relations Commissioner and Lan-Oak Park Board Commissioner Micaela Smith had made, including roughly 100 boxes of food from Project Increase, a Chicago-based group focused on eliminating poverty. Smith serves on the board of Project Increase. She said 10 additional large bags of food came from Provide Chicago, another Chicago organization that seeks to help under-served citizens. In addition to hosting the event in its parking lot, First United Methodist Church in Lansing provided food also.

Sanchez knew David Price, the pastor of First United Methodist Church, from participating in the church’s Walk Over Wednesday program, where TF South students are invited to come to the church—which neighbors the high school—to eat and play games after school on Wednesdays. Sanchez contacted Price about using his church’s parking lot for the food drive and Price readily agreed.

Price said, “Cam told me he had boxes of cereal and peanut butter and jelly. So I said, you know what, if you’ve got peanut butter and jelly, maybe our church can buy bread. And if you have cereal, maybe we can buy milk.” Price introduced the idea of the food drive to his congregation on Sunday, August 23 and took an extra offering to allow them to donate toward the cause.

Sanchez and the nearly 40 volunteers distributed the items to each car based on a quick survey that was given to each person. The survey asked how many children were in the driver’s family and what the children’s age ranges were. The amount of food given to each car varied based on each person’s survey responses.

Many of these surveys were handed out as cars waited in line in the shoulder lane of southbound Burnham Avenue. Sanchez coordinated with the Village and Lansing Public Works to get permission to mark off the shoulder lane with Public Works’ traffic cones. These cones were placed throughout the parking lot as well to help direct drivers.

Hope for the future

Sanchez said that although the food drive was a success, he has some ideas for how he wants to improve the event in the future, including having more time to plan beforehand, assigning volunteers to specific tasks or areas, giving volunteers name tags, and including a prayer element at the end where recipients can be prayed over. Both Sanchez and Price said they are looking forward to doing the food drive again next year.

“My goal was to reach every single family. Families that were in need, or families that might not have been as much in need—it doesn’t really matter, it’s not my business. As long as we reached them and had an impact on them, that was my goal,” Sanchez said. “It wasn’t about the volunteer turnout, it wasn’t about how I felt or whatever. It was about getting people the food.”

Pastor Price said that Cam “inspires hope for the future” and invited Cam  to speak to his congregation on the Sunday following the food drive. “I wanted to put a face to ‘the 17-year-old’…and now [the congregation] knows who Cam is.”

Price said that a young person in his congregation attended Saturday’s event and was inspired to contact First United Methodist Church and start making plans to create a micro pantry on the church’s property to continue to meet the food-related needs of the community.

Sanchez has been an active part of the Lansing community in the last few months, working with other young people and the Village of Lansing to perform a peaceful Black Lives Matter protest in late June, and being the youngest participant in the Lansing Human Relations Commission’s pilot race relations program Common Ground.

He said that the COVID-19 pandemic kick-started his drive for community involvement. “COVID gave me time to think and reflect a little: although I’m young, what have I done? What can I do? What do I have the power to do, you know? It gave me an opportunity to get out and start doing stuff,” he said. “I see people doing stuff all the time, and I’m like ‘Oh, I wish I could do that.’ Why can’t I? Why can’t I organize a team, assemble, and get out and do what you need to do. That really gave me drive to want to do and see more.”

Sanchez is a senior at TF South and plans to attend Illinois State University next year. The lifelong Lansing resident hopes to continue serving the Lansing community in larger ways and currently aspires to obtain a business degree and start a nonprofit organization that can serve the people of Lansing.