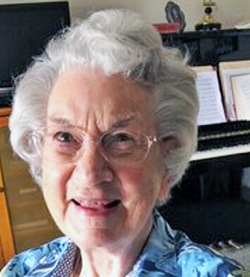 Leona was baptized and made profession of faith at 2nd CRC of Lynden, WA. After attending Lynden Christian Elementary School and Lynden High School, she completed business college and was employed at Columbia Steel Co. in Seattle.

Several years later, she met Alonzo of Chicago, IL, while she was employed at the First Christian Bookstore in Bellingham, WA.

After a courtship that included many written letters, they were married and moved to Englewood, Chicago, and started a print shop together. They both enjoyed playing the piano and treasured playing duets together. In 1949 they moved to South Holland and Leona devoted her time and energy to her growing family. She inspired them with her spontaneity, and thought of her life as an adventure. She was an example of loving service and courage, her hospitality extending to friends, relatives, and those serving on mission fields at home and abroad.

One of Leona’s favorite Bible passages was “Now to him who is able to do exceedingly abundantly above all that we ask or think, according to the power that works in us, to Him be the glory.” (Ephesians 3:20-21)

She is survived by her 10 children, and their spouses, 21 grandchildren and 18 great-grandchildren.

Visitation Friday, August 28, 2020, from 2:00pm until time of the funeral service at 5:00pm at Smits Funeral Home, 2121 Pleasant Springs Ln, Dyer, IN. Interment Oak Ridge Cemetery – Lansing, IL. Memorial contributions may be given to Back to God Ministries International – www.backtogod.net.