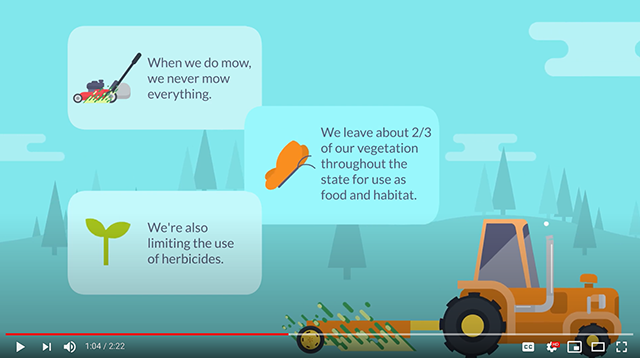 Motorists urged to stay alert and slow down when encountering crews

SPRINGFIELD, Ill. (July 9, 2020) – The Illinois Department of Transportation is reminding the public that seasonal mowing operations have resumed throughout the state. Motorists should be prepared to slow down, put down devices, avoid distractions, and proceed with caution when encountering mowing equipment and personnel.

In recent years, IDOT has revised its mowing practices to help create and maintain habitat for pollinators, including the monarch butterfly, which became the official state insect of Illinois in 1975 and is currently at risk of being declared endangered. Pollinators play a vital role in the Illinois ecosystem and agricultural economy by aiding in reproduction of flowers, fruits, and vegetables.

By carefully timing when mowing takes place, and by reducing the amount of land being mowed, IDOT is encouraging the growth of critical plant species, such as milkweed, the only food source for monarch caterpillars.

The video below provides more information about IDOT’s mowing schedules and its work with pollinators:

For its efforts, IDOT has won national honors from several organizations, including Pheasants Forever and the North American Pollinator Protection Campaign.