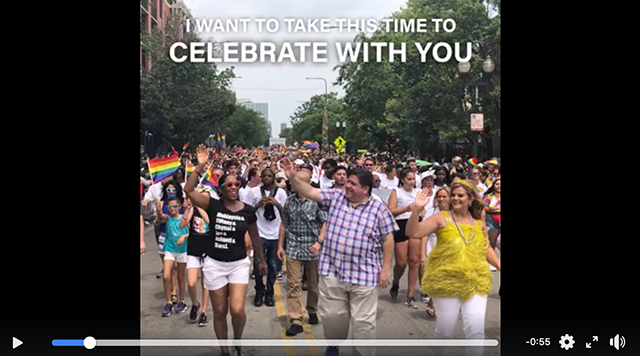 SPRINGFIELD, Ill. (July 1, 2020) – “Thanks to the tireless help of advocates and allies throughout the state, Illinois is becoming a beacon of equality and hope for the national LGBTQ community,” said Governor JB Pritzker. “While we have so much to celebrate, we must recognize that we have much more to accomplish. We must end the attacks of hate against non-cisgender people, particularly trans women of color. We must end the discrimination that permeates our workplaces and bullying in our schools. We must end the HIV epidemic that rages on in our Black, Latinx, and transgender communities. I and my entire administration stand with the LGBTQ community in both the celebration of hard-fought victories and also in the continuing fight for justice and equity.”

In a proclamation recognizing June 2020 as Pride Month in Illinois, Gov. Pritzker paid homage to the LGBTQ rights movements founding by transgender women of color like Marsha P. Johnson and Sylvia Rivera.

Illinois has long been a leader in advancing and affirming LGBTQ rights. The first Pride Parade took place in Chicago in 1970, one year after Stonewall. The following year, marches took place across the nation.

In 2011, civil unions and adoption rights were secured for LGBTQ people. In 2013, marriage equality was passed and signed into law. In 2016, conversion therapy and discrimination on the basis of sexual orientation and gender identity were banned in Illinois.

In the last year and a half, the Pritzker administration has taken steps to protect and codify the rights of LGBTQ residents in Illinois, including:

The Governor’s Pride Month proclamation can be viewed and downloaded here (PDF).

A video celebrating the progress made in Illinois is viewable below: