LANSING, Ill. (June 7, 2020) – When you’re a young black man in Lansing, you have a unique combination of responsibilities to the diverse influences who speak into your life. Family, teachers, “the black community,” “white power,” media, church, friends, and neighborhood all have ideas about what kind of person you should be. For any young person, finding your own voice is a process of evaluating those influences and choosing which to cultivate. The more diverse the influences, the more difficult it can be to find the truth within each of them, and cultivate that while respectfully ignoring the rest.

Cameron Sanchez, Chawn “CJ” Wilson, and Jawaan Dorch are young black men in Lansing. Students and graduates of TF South, they are admired by their teachers, loved by their moms, earnest about following God, and protective of Lansing, the community they call home.

“I’ve always loved being in Lansing,” said Sanchez. “You can go to Ridge and Grant, and it’s like a small town square and everybody knows everybody.”

Dorch moved here a few years ago and was immediately impressed with how welcoming the community was. “Everybody was just—nice,” he said, noting that not every town he’s lived in has been that way.

When news of last Sunday’s riots began spreading, Sanchez, Wilson, and Dorch reacted. “We were like, ‘No, that’s not what we do here. We’re not gonna do that. That’s not what we’re about,'” remembered Wilson.

They wish they could have done something to prevent the violence before it reached Lansing, and they are frustrated that anyone thinks damaging local businesses will help solve the problems represented by George Floyd’s May 25 death. “What does [looting] do?” they asked. “How does that help?”

“If you tear down a business—and then expect for a cop to be on your side?” said Wilson, “then you must be confused, ’cause it does not help anything.”

Instead, he said, “When you come together and you’re able to talk with each other and be one with each other, that makes everybody feel more comfortable.”

The violence did reach Lansing, though most Lansing businesses did not sustain the same level of damage and loss that neighboring towns did. One reason Sanchez, Wilson, and Dorch wanted to stage some kind of public statement was to protect the reputation of their hometown. They want the world to know that the damage was down by outsiders, not locals. And they want to prevent misinformation and wrong assumptions from creating division in diverse communities that currently look out for each other.

“Every other city,” Wilson generalized, “decided they wanted to be aggressive and violent. That’s not what Lansing is about.”

“Our overall goal is to spread peace,” said Sanchez about the protest he and his friends organized in Lan-Oak Park on Friday, June 5.

They started on social media with a simple invitation: “Peaceful Protest,” the time and location, some basic instructions, and their Instagram handles. They had a general idea of marching south along Torrence Avenue and east on Ridge Road, ending at Lansing’s Clock Tower. 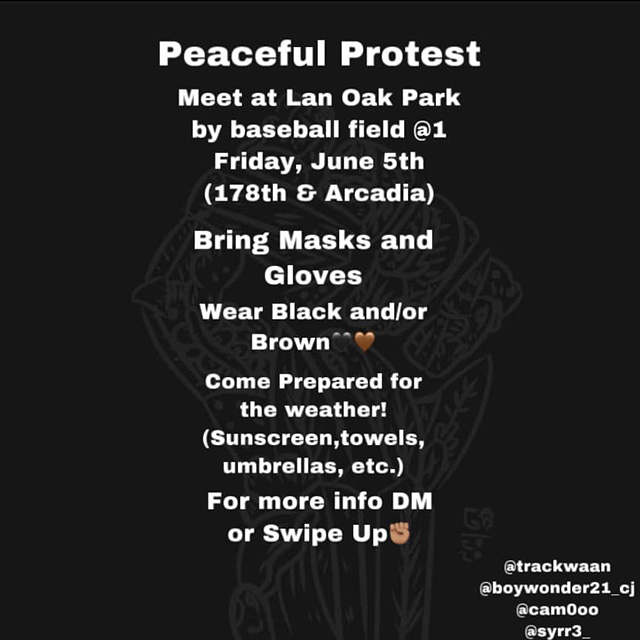 Village Trustee Saad Abbasy saw the post and messaged one of the young men. “I just said, ‘I’m a Trustee, I love that you want to do this. Can I just put you in touch with our police chief so that they can just help you and out make sure things are handled well,'” explained Abbasy. The young men accepted the help, and they met with the Lansing Police Department on Thursday, June 4.

Given Lansing’s recent experience with bad actors descending on the area and bringing violence, the police were reticent to provide a similar opening for opportunists again. Some organized looters scan social media for news of protests and then target those areas, knowing the police will be busy and distracted. So LPD worked with the young men to create an event that would be public, peaceful, and protected.

At 9:00am Friday, Mayor Patty Eidam went door-to-door in the Lan-Oak Park neighborhood, personally explaining to residents that an organized peaceful protest would be taking place in the park. She rang each doorbell along 180th Street, Oakley Avenue, 178th Street, and Arcadia, and spoke to each homeowner who opened the door.

If no one answered, Mayor Eidam left a letter describing the upcoming event. The letter read, in part:

“These young people, (initially said to be numbering 100 or less), have notified the Lansing Police Department and the Mayor’s office of their intentions to protest peacefully.

“…The Village of Lansing recognizes their right to assemble and to express their beliefs. However, the group has been strongly advised that any expressions that are not peaceful will not be tolerated.

“…As your mayor, it is my responsibility to provide for the safety and well-being of your property. Part of that responsibility includes notifying you of protests like this, which is why I am personally hand delivering it to your house.

“While recognizing the rights of citizens to assemble and enjoy the freedoms of speech and expression, please know that it must be done peacefully and not infringe on others’ rights. The Lansing Police Department will be on hand to ensure the protest remains peaceful.”

At 1:30pm the young men, Lansing police, and several volunteers began setting up shade tents and tables in the northwest corner of Lan-Oak Park. Friends, family members, and TF South teachers unloaded cases of water, soda, and snacks that had been donated for the event. Wilson, who works at OooWee Chicken & Ribs (18155 Roy Street in Lansing), had asked owner Avery Hall if he could purchase 100 wings for possible participants, and Hall donated the wings instead.

Small groups of people holding handmade signs and posters began arriving and assembling. TF South was unofficially represented by District 215 Superintendent Teresa Lance, District 215 Board Member Rich Dust, Principal Jake Gourley, and others. Village Trustees Maureen Grady-Perovich and Saad Abbasy introduced themselves to Sanchez, Wilson, and Dorch and offered their encouragement. Lansing police met with the young men and explained they would be available as needed. “These are some good kids,” Detective Lt. Al Phillips said. “Some very good kids.”

The crowd included families, groups of teens, and members of the 1960s generation known for protests and social justice—men and women, young and old, black, brown, and white.

“Thank you for making it out here,” Sanchez welcomed the crowd at 2:00pm. Temperatures had reached a humid 88 degrees, so he encouraged people to partake of the shade, water, and refreshments available nearby.

Wilson opened with some spoken word poetry that he had written as a way of processing the conflicting truths revealed in the events of the past two weeks. The words he read addressed fellow blacks, white police, and the broader community.

His readings included the following excerpts:

“Dark time times got the sun off track,
we using dark wit dark ain’t no light from that.
Love through hate when hate is at its best,
burning and stealing
just adds more trash to this mess.”

“We take out bad with good as hard as it may sound,
doing bad will create another
head down knee to neck FACE on the ground.”

“Forgive but don’t ever forget,
if Jesus can forgive the men who killed him,
we can forgive a crooked man and whoever he wit.
As hard as this may sound and as mad as you may be,
as long as anger is blinding you brothers and sisters you’ll never see.”

“You are strong because of the color of your skin,
hair of wool
skin of bronze
and you’ll always win.
When they hate more I pray more,
being violent won’t help….”

“I definitely believe that not all white people are racist or hate blacks,
but there’s alot of them that do
and that’s nothing but facts.”

“My dad talks to me
about different situations with white cops
and what I need to do,
if a white person had a talk
bout a black man wit his son
it’d be about teaching him how to shoot.”

“And why should it even have come to that,
it’s crazy as it is,
I’m 18 and this makes me just not want kids.”

“Yall just gotta be in control huh,
have yall life of diamonds and pearls,
imagine if all whites saw blacks as equals
it would be a different world.”

Jawaan thanked the crowd for coming and reminded them that this was a peaceful rally. “The police are here with us,” he said. “We’re all as one. There’s no separation.”

Following a prayer, Sanchez gave the floor to anyone in the crowd who wanted to express something, and several accepted the opportunity.

Following a time of small-group conversation, the Peaceful Protest culminated in a peaceful-yet-vocal march around Lan-Oak Park, escorted by police.

The Peaceful Protest ended around 4:00pm, though groups continued to connect, exchange information, and take photographs while volunteers took down the tents and made sure the area was completely clean.

Less than 24 hours later, Sanchez posted a thank-you on his Facebook page:

Words can’t describe the amount of support & love my team & I received yesterday. This needs to be ongoing, the conversation(s), the bond(s), the growth needs to NEVER stop. Especially in my home town, Lansing! Working together as a community makes us stronger then we can imagine. But, it all starts with you!

Thank you all for coming out &  we look forward to more & more events, mainly in Lansing!

A special thanks to: