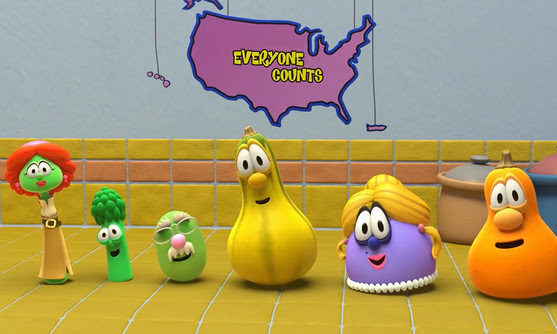 Information provided by the US Census Bureau

CHICAGO, Ill. (June 1, 2020) – What better way to highlight the importance of counting young children in the 2020 Census than in words and song from Bob the Tomato, Larry the Cucumber and their VeggieTales pals? Children love to see their favorite characters on TV, online, and in books. Often these characters can teach them key lessons like how to brush their teeth, get ready for bed, and take care of younger siblings.

Now the U.S. Census Bureau is using a similar approach to teach tots and their parents about the importance of counting everyone—especially young children—in the 2020 Census. Through partnerships with children-focused groups from Nickelodeon to Wonderama, and Molly of Denali and Daniel Tiger, young children and their families are being educated about the 2020 Census in fun and engaging ways.

Characters like The Count, The Cat in the Hat, and Larry the Cucumber are all trusted voices to little ones across the country, and when kids can learn about the census through their favorite characters, they’re more likely to hear the message of being counted and make sure their parents know to count them in the 2020 Census, which is underway.

Why is it important?

Census results inform decisions on funding for the next 10 years for programs and services, including those that affect children such as schools, libraries and nutrition assistance. Yet young children are among groups historically under-counted in decennial censuses. In the 2010 Census, there was a net under-count of nearly 1 million (or 4.6% of) children under age five, making them one of the largest population groups under-counted in the United States.

It is vital that all young children, including newborns born on or before April 1, 2020, are included when their parents or guardians respond to the census. Many programs that receive funding based on census data directly impact the well-being of children. This includes programs like Head Start, K-12 schools, nutrition assistance, and many others. Knowing how many children live in an area can greatly influence the placement of new schools, libraries, hospitals, and more—which can all have an impact on children for their entire lifetime.

Among other efforts, the Census Bureau teamed with VeggieTales to create a new video that explains the 2020 Census in a way that is fun and easy for children to understand.

The video shows several scenes with the vegetable characters discussing what the 2020 Census is and why it’s so important—and wraps up with a catchy sing-and-dance-along tune, “Everyone Counts!”

Sesame Street has been a long-time Census Bureau partner and has created many materials to help encourage a complete count of young children in the 2020 Census.

In February, Sesame Street characters Rosita and The Count visited children at a Census Bureau event at the Great Lakes Science Center in Cleveland, Ohio, aimed at upping the count of kids. Sesame Street also developed a public service announcement starring The Count and Elmo encouraging parents to participate and include children in the census.

The Census Bureau is also spreading the word on its Statistics in Schools (SIS) website—an educational program powered by the Census Bureau — where a series of Dr. Seuss coloring pages stress the importance of counting everyone in the 2020 Census.

Kids can choose from a variety of free, fun SIS activities, including coloring, a maze or counting games that play right into the theme of making sure everyone is counted.

How to count young children

Do you have young children in your home? Be sure to count them in the right place. Here are some guidelines to help you respond to the 2020 Census:

For more resources to engage with children about the 2020 Census, visit 2020census.gov/en/educators.