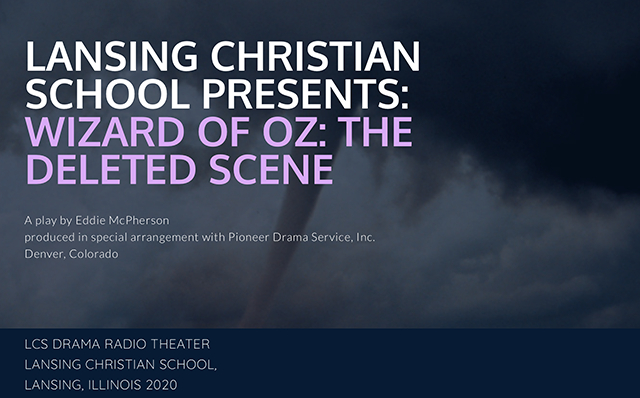 LANSING, ILL (May 26, 2020) — The show must go on—but what if the show is a junior high play, scheduled during a global pandemic?

Then you change it to radio theater.

The Lansing Christian School (LCS) junior high drama students and their directors planned to be onstage performing Wizard of Oz: The Deleted Scene by Eddie McPherson this spring. When they found out that they wouldn’t be able to put on their play as expected, they looked for another way to continue their production.

“We were two rehearsals in when they told us we couldn’t come back [to school],” said LCS teacher and play director Joy Krygsheld.

At first, the school closures due to coronavirus were going to last two weeks—then the lockdown got longer, and finally, schools were declared closed for the year. The drama group had two choices: quit, or find a way to make it work. Inspired by the famous “War of the Worlds,” they decided to give radio a try.

“I think one motivator for the kids was that this was the only extracurricular activity that was not cancelled,” Krygsheld said. “I think they appreciated that we stuck with it.”

The directors read through their script and made a few changes where the dialog wouldn’t work for radio. Krygsheld learned to use Audacity, an audio-editing program, and the cast moved their rehearsals to Zoom.

When it came time to record, the actors turned off their cameras, so they could have a more accurate feel for how their audience would experience the show.

“The kids did pretty well with it,” said Tracy Perkinson, another LCS teacher and the play’s co-director. “They were offering their own suggestions for the script. They listened to the instructions we gave them, and they were helping each other out, too—it was really cool to see them take ownership of it.”

The final version of the students’ performance is available at https://lcsdrama.weebly.com/.