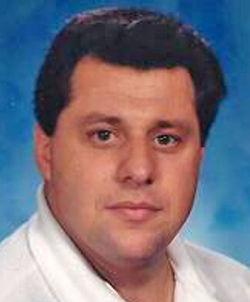 Larry S. Necastro, age 72, passed away Tuesday May 19, 2020, at his residence, after a two-year struggle with cancer.

He was recently a resident of Chicago, and previously lived in Barrington, Ill. He was born on January 6, 1948, in Chicago Heights, Ill., and was raised in Lansing. He is survived by two sisters, Cathleen (late Daniel) Bolda, of Calumet City, and Mary Ann (Thomas) Golden, of Lansing; two brothers, Robert (Susan) Necastro, of Lansing, and Daniel (Mary Jo) Necastro, of Lake Barrington, Ill.; several nieces, nephews, great nieces, great nephews, and cousins. He was preceded in death by his parents, Joseph and Elsie M. Necastro, and by his brother, Richard (Dawn) Necastro.

Larry was a graduate of TF South High School in Lansing, where he was a member of the wrestling and football teams. He was a U.S. Army veteran, serving in Vietnam as a member of the Military Police. He enjoyed all sports, especially football, and played semi-pro football with the Rockford Rams and the Joliet Chargers. In the 2013 St. Ann Parish centennial book, he is credited with creating the name “Rough Riders” for the St. Ann School sports teams. He earned a BS degree from Chicago State University and was employed as a teacher of PE/Health and Safety, and Drivers’ Education at TF South and Bloom Trail High Schools. Later he had a career as an entrepreneur as co-owner of a Nautilus Fitness Center, a co-owner of the Necastro’s Pizza in Calumet City, and a co-owner of the Alaskan Pipeline in Schererville. He retired as a member of the Bartenders’ Union in Chicago, working at the Hilton, the Hyatt, and at McCormick Place. Larry was an outgoing person who enjoyed conversations with people and talking with his many friends by telephone.

In lieu of flowers, donations may be made to the University of Chicago Medical Center Cancer Research Charity on behalf of Larry Necastro, or for Masses, or to the American Cancer Society.

Due to the COVID-19 pandemic situation, funeral services and burial for Larry will be private. Larry will be laid to rest at Abraham Lincoln National Cemetery, Elwood, Illinois. A memorial celebration of life including a Mass will be held at a later date. May he rest in peace.