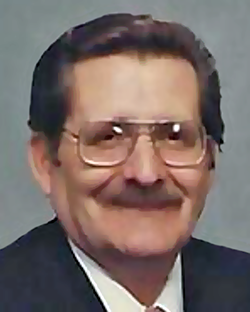 Ralph J. Schauer, age 88 of Lansing, IL, former Fire Chief of Lansing—served in the department from 1961 and was appointed Chief from 1970 to 2001—left his earthly home on Thursday, April 30, 2020, at Community Hospital, Munster, IN, following a fall and extended confinement at local health facilities.

Due to the current COVID-19 virus situation, services for Ralph will be private. Schroeder-Lauer will host a private wake from 10:00am–1:00pm on Thursday, May 7, and a private service will be held immediately after. At approximately 1:30 a procession of fire vehicles will lead the hearse from the funeral home past Fire Station 29 (19300 Burnham), where it will pass under a large American flag held by two fire truck ladders. A group of firefighters will be in position to salute the hearse as it passes under the flag. The procession will then continue to Holy Cross Cemetery in Calumet City, where Chief Schauer will be laid to rest. The services at the cemetery will also be for family members only.

The family would like to take this opportunity to thank everyone that has reached out to offer comfort, love, and support.

Ralph’s beginnings were at the family home on the “East Side” of Chicago, the oldest of 4 children who were raised there until moving to Lansing in 1949. He was always interested in cars and worked for Hirschbach Motors for several years. He is remembered by local emergency departments as a quiet man of few words and deep voice, over the radios described as “the voice of god.” Ralph followed his father’s (Ralph Schauer, Sr.) example of serving on Lansing’s Volunteer Fire Department in its early years. He later was credited with being the village’s first full-time firefighter in 1970, and eventually spent 40 years as the department’s chief. He served as President of the Illinois Firefighters Association and was instrumental in beginning the paramedic program. Ralph enjoyed many outdoor activities and sports. He was a hunter, fisherman, and kept horses at his sister’s farm, where he also drove the tractors during the busy growing seasons. He loved his large extended family to the extent that he would do anything for them, even if it meant a deep-voiced warning explaining right from wrong. He will be greatly missed by his many relatives and friends who survive him.

In lieu of flowers memorial donations may be made in Ralph’s name to the Lansing Fire Department and/or Paramedic Program.