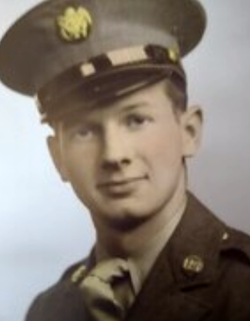 Due to the COVID-19 virus situation, funeral services for Cecil will be private. Cecil will be laid to rest at Assumption Catholic Cemetery, Glenwood, Illinois. A celebration of life will take place at a later date.

Cecil was born in Kansas in 1921. The family later relocated to Missouri. In the early 1930s, with little employment available, he joined The Civilian Conservation Corps, working in Idaho. When WWII broke out, Cecil enlisted in the Army Air Force hoping to become a pilot. Unfortunately, he didn’t know he was color blind and was disqualified. Being innately talented mechanically, he trained to become a flight crew chief/crew chief working primarily on P-38 fighter airplanes. He served on numerous islands throughout the South Pacific. Prior to shipping out of the country, he was stationed in Salt Lake City. He had met Angeline in Chicago while on leave from Chanute Air Force Base. She traveled by train to Salt Lake City, where they were married.

After the war, Cecil and Angie lived in Chicago. He worked briefly as a security guard for Marshall Fields. That was followed by a 33-year career at Ford Motor Company in Chicago. He achieved the position of General Foreman, supervising different aspects of auto assembly. Throughout his life, Cecil enjoyed hunting, fishing, and camping. He also enjoyed traveling with Angie, family, and friends. Birthdays and holidays were celebrated with his wife, four children, their spouses, 10 grandchildren, 19 great grandchildren, and 1 great great granddaughter. Cecil was loved by many and he will be truly missed.