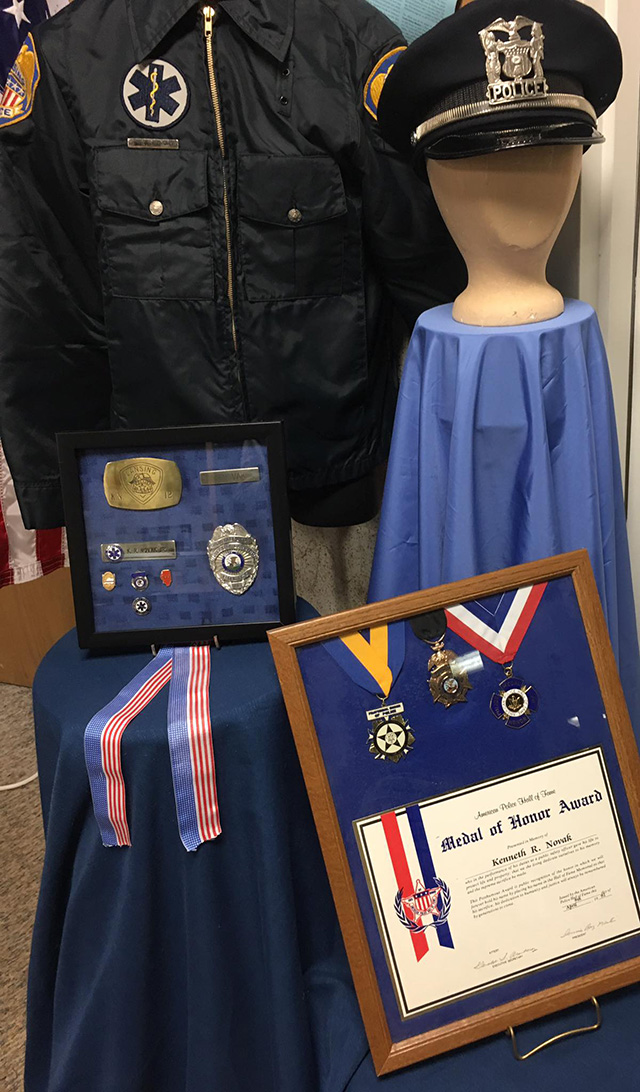 Kenneth Novak, Jr. died in the line of duty 28 years ago on April 8

LANSING, Ill. (April 7, 2020) – If you haven’t lived in Lansing long, the name Kenneth Novak Jr. may not be familiar to you. But if you lived in Lansing 28 years ago, you’ll remember that Officer Novak was the first (and only, to date) Lansing police officer to be killed in the line of duty.

An eight-year veteran of the Lansing Police Department, Novak started as a police cadet and later became a part-time officer. He also served as a police dispatcher and certified paramedic. As special officer, Novak had volunteered to work a shift on the evening of April 8, 1992. While on patrol he came across what looked to be a disabled vehicle. When he tried to help the driver, he was fatally shot. Another officer, George Dragicevich, was also shot but survived. Dragicevich returned fire, fatally shooting the gunman.

For Novak’s younger sister, Kathy Faucault, “it all comes to me in numbers now,” she said. “I think about how he was 27 when he died and now he’s been gone 28 years. I think of how my own daughter is going to be 26 this year,” she explained. “Wow, she’s almost as old as he was when he died. He would have been 55 this year. I wonder if he’d be retired by now, or if he’d still be involved with the department he loved so much, unable to step away from it.”

One of the hardest parts for Faucault is that her children never had a chance to meet their uncle. “While my children never knew him, they certainly knew of him. My autistic 20-year-old brings him up frequently, when he talks about train books or certain movies. Every movie my son owns—and he owns a lot—has someone attached to it. His copy of Eddie and the Cruisers is ‘Uncle Kenny’s favorite movie,’ because he was told that Ken used to like that movie.”

April 8 has been designated as Lansing Fallen Heroes Memorial Day in honor of Novak and also LCPL Phil Martini, who was killed in action while serving with the U.S. Marine Corps in Iraq on April 8, 2006. (See “Semper Fi: a story of three Lansing Marines and their legacy of loyalty,” a November 2019 article about Martini.) For the past several years the Lansing Historical Society has prepared an exhibit dedicated to the pair and has kept the museum open for extended hours on April 8 to give family and friends of the two an opportunity to visit and remember them. With the library closed this year as part of the COVID-19 stay-at-home order, the museum will not be able to open the exhibit to the public.

Part of the exhibit is a video of Novak’s funeral where hundreds of people lined the streets and a procession of vehicles from different police department’s seemed to stretch on for miles. Novak’s parents, Pat and Ken Novak Sr., still think back with appreciation of the support they received from their son’s brothers and sisters in blue in the department, the police community as a whole, and the Lansing community. Novak Sr. said he is comforted by memories of his son and also by those who worked with him and knew him well who make sure he isn’t forgotten. He is also touched when he comes across people who didn’t know him but express interest in learning more.

“This event took place 28 years ago. So many now live here that were not here then. Within the last few years, I’ve been meeting new people, and sometimes during conversation I will mention Kenny being a police officer/paramedic who was killed in the line of duty. Some will have vivid memories of what they were doing that night or the day of the funeral. Others will say that they remember it. And many will just say ‘Sorry to hear that,” said Novak Sr. “The most interesting story lately is that a couple months ago I had a doctor’s appointment with a new doctor. I wore a t-shirt with ‘In memory’ on the sleeve. He asked if I was a police officer. After I answered, he began to ask questions and showed a genuine interest in Kenny. I think he invested more time in Kenny than he did in me.”

The gift of memories

As happens each year in early April, Novak said his Facebook wall and message inbox are filling up with sentiments honoring and remembering his son. “Many are changing their profile pictures,” he said. “Most have retired now. Some have moved on to serve other communities. Some have just moved on and are deeply missed.”

The memories, his father acknowledges, are a gift. “As I sat here last night, thought after thought about that night and days following, it occurred to me that the Good Lord blessed us with an ability to remember. I have many memories, even a couple from when he was just a toddler. These memories are just a whisp of some event that covered a longer period of time, but leave you with just that one moment that made it special,” explained Novak. “We, in living a normal life, go for days, weeks, and months without retaining a memory. That night and many days after are different. From the knock on the door until right now, I have vivid memories of my thoughts, words, and actions, the words and actions of others, and the emotions shared by all involved. My many friends who were involved that night will tell you in detail what they did and felt that night, and some still may choose not to.”

The family carries memories of a young boy who always wanted to be a police officer, from the time he was a young child on a tricycle making siren noises and stopping other bicyclists who were going too fast. And memories of a young man who loved watching trains and fishing. And of a musician and songwriter. And the kind of guy who would volunteer to work an extra shift just because he loved it so much.

“Kenny enjoyed his short stay on this earth to the fullest,” said Novak. “He had many hobbies that he shared with many friends, most of all who were police officers. These hobbies would be abandoned immediately if he thought he could help out the Lansing Police Department. He died doing the job he loved, surrounded by the people he loved. I take comfort in that now, but today my thoughts are with the ones he left behind. They are still left with emotions that they felt that night. Most won’t remember how important it was for them to be there, but I’ll guarantee you, they’ll remember how much it hurt.”