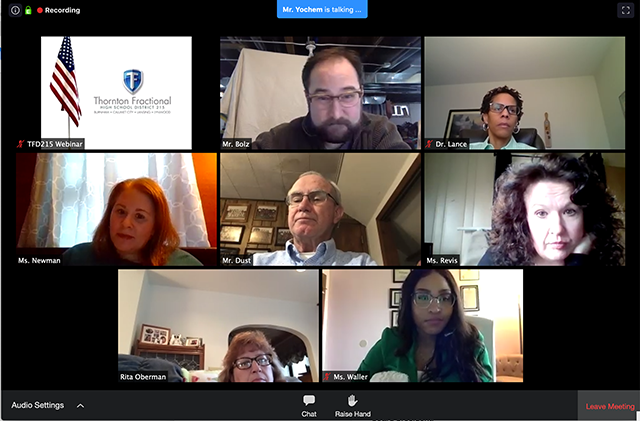 CALUMET CITY, Ill. (March 24, 2020) – Following instructions provided in a March 20 email from Executive Assistant Dominique Newman, the seven members of District 215’s Board of Education and Superintendent Teresa Lance logged in by computer and phone for the Tuesday, March 24 Board meeting. This was the first time a Board meeting had been conducted online.

Newman explained via email, “The Open Meetings Act requires that a quorum be physically present, but Gov. Pritzker issued an executive order to lift that restriction due to the need right now for social distancing.” District 215’s IT Director Paul Wakefield held one-on-one practice sessions with Board members before Tuesday to ensure their technology was set up properly, and the Tuesday meeting ran virtually trouble-free.

Approximately 30 members of the public also joined the meeting and were able to watch and listen to the discussion but not speak. Newman had requested that any public comment be emailed to her in advance of the meeting. She forwarded those comments to the Board, and President Bolz read them aloud for the viewing audience.

The virtual meeting lasted about 40 minutes before the Board adjourned into a closed session meeting, which involved leaving one webinar and logging in to a separate, private webinar. The public webinar was left open through the duration of the closed session meeting, and members of the public were invited to remain logged in and keep the screen open on their computers.

Board members returned from closed session at 7:35pm and logged back in to the public webinar.

After conducting the final items of business, Board President Michael Bolz expressed thanks to attendees as well as Board members for participating in this new style of meeting, and to the IT Department for making it possible. The virtual meeting adjourned before 7:40pm.

Future meetings—either online or in person—will be announced at least 48 hours prior to the meeting date, in compliance with the Open Meetings Act. The public is invited to attend meetings of the District 215 School Board, and instructions for accessing online meetings will be included with the agenda.