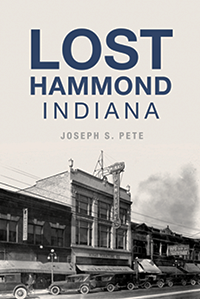 HAMMOND, Ind. (March 6, 2020) – “For over 20 years Arcadia Publishing has reconnected people to their community, their neighbors, and their past by offering a curbside view of hometown history and often forgotten aspects of American life,” reads the About Us page of the Arcadia Publishing website. In the newest installment in their Lost series—Lost Hammond, Indiana—Hammond-born journalist Joseph Pete explores the hardworking people of the industrial calumet region. From its meatpacking roots, to its varied factories, to the racetracks and casinos that gave it a reputation as “Atlantic City on the Lake,” Hammond is a city that helped build Chicago and America.

Hammond gained indirect fame when A Christmas Story was released in 1983. The movie shares the childhood memories of author Jean Shepherd, who grew up in Hammond, though the town is renamed Hohman in the movie. Pete references the movie as well as historic Hammond landmarks like Phil Smidt’s, Madura’s Danceland, the State Theatre, the Woodmar Mall, and the W.B. Conkey factory.

The book will be released April 14, 2020, and is available for preorder at the Arcadia website:

Joseph S. Pete was born in Hammond and lived by the city for much of his life. He’s an award-winning journalist for the Times of Northwest Indiana, an Iraq War vet, an IU grad, the Northwest Indiana Literary Journal editor, and a frequent guest on Lakeshore Public Radio. His work has appeared in 150 literary journals and in books like Indiana at 200 and Poets to Come: Walt Whitman’s Bicentennial. He never misses Festival of the Lakes.