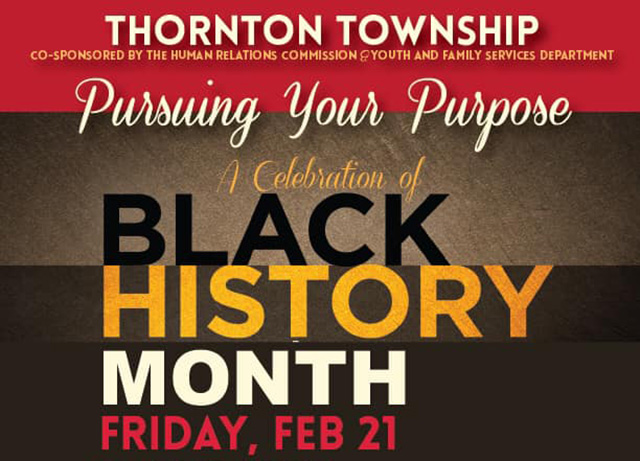 SOUTH HOLLAND, Ill. (February 28, 2020) – With a focus on finding your purpose, Thornton Township celebrated its annual Black History Month event on Friday, February 21, with music, dance, and inspirational words. More than 220 people attended the celebration at the Township’s youth and family services building, 14323 S. Halsted in Riverdale. It featured music from the TF North High School choir and presentations by the TF North speech team and a special guest speaker.

Corion Jerold, 16, of Calumet City, enjoyed the speech and performances. He expressed some of his experiences as a black man in today’s society: “When you walk into a room and everyone just stares at you, but they don’t understand you. It’s like they’re judging you off the way you dress, the way you talk, the way you look and laugh.” Those experiences illustrate the need for continued observance of Black History Month and events like those provided by Thornton Township.

“I feel like there is so much black culture that’s not represented and cannot be represented in one month,” Jerald added. “There shouldn’t be just one month dedicated to representing only a certain specific couple of topics of black culture because there are a lot of things that aren’t brought up from underneath the dirt, that aren’t explained.”

Black history is something that is taught almost every day in various ways, through school, social media, research, and personal experiences. Black history has been around for hundreds of years, however it was never acknowledged or celebrated until 1926 when Carter Woodson designated the second week of February as “negro history week.” Later, President Gerald Ford appointed all of February to be a time to truly celebrate and acknowledge what has been done and is still being done in black history.

The keynote speaker at Thornton Township’s celebration was Traci Gourdine, a published author and co-editor of Night is Gone, Day is Still Coming, an anthology of writings by young native writers. Gourdine is a professor of English at American River College and chaired the Creative Writing department for the California State Summer School for the Arts from 1988–2013.

Gourdine spoke in remembrance of her father, Dr. Meredith Charles Gourdine, a world-renowned engineer and physicist, and a silver medalist in the 1952 Olympic Games. Ultimately better known for his work in thermal management technology than for his 24-foot long jump, Dr. Gourdine specialized in research relating to electrogasdynamics, a method used to disperse fog and smoke. Other applications of electrogasdynamics include refrigeration, desalination of seawater, and pollutant reduction in smoke. The companies Dr. Gourdine founded worked on purifying the air and converting low-grade coal into inexpensive, transportable, and high-voltage electrical energy. They produced a commercial air-pollution deterrent, a high-powered industrial paint spray, and a device to eliminate fog above airports

“I think about the contributions that black people made and took from all different walks of life,” said Robin Bell, 17, of Calumet City, “which makes me proud.”