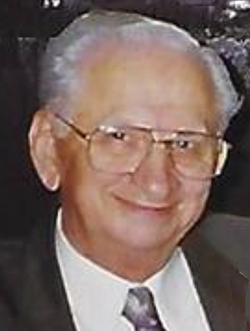 Funeral Services will be held on Saturday, February 29, 2020, beginning with 9:30am closing prayers at the Schroeder-Lauer Funeral Home (3227 Ridge Road in Lansing) and proceeding to St. Ann Catholic Church (3010 Ridge Road in Lansing) for a Mass of Christian Burial at 10:00am. Interment will follow at Holy Cross Cemetery in Calumet City. Friends may visit with the family on Friday from 2:00 to 8:00pm at the funeral home.

Mr. Banach was a graduate of St. Florian Grade and High School in Hegewisch. He was a World War II veteran, serving in the Navy from 1943 to 1946 aboard three ships: USS Laub (DD613), USS Queens (APA103), and USS LST 485. Entering active duty at age 19, he saw action in the Atlantic, Mediterranean, and Pacific. Edmund participated in an Honor Flight to Washington, D.C. on May 7, 2014. He was an active member of St. Ann’s Church, serving as an usher for many years, Usher’s Club President, and Men’s Club Treasurer. Edmund worked for Lever Brothers, Standard Oil, Bowman and Dixie Dairies (home delivery), and Cargill (formerly American Maize), from which he retired in 1989. Edmund had been a Bears and Cubs fan and was fortunate to see his beloved Cubbies win the World Series in 2016.