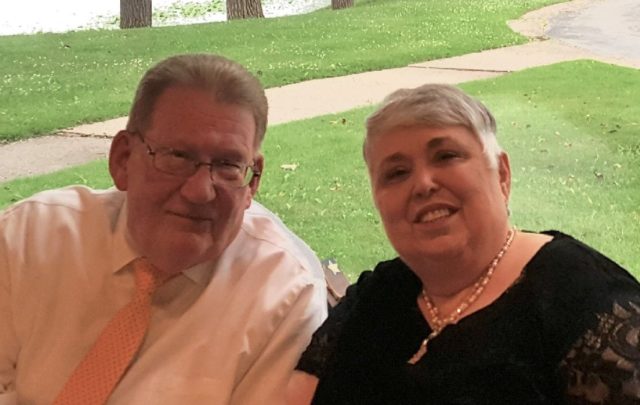 LANSING, Ill. (January 31, 2020) – Karl and Judy Koch of Lansing were married June 22, 1968. “If you remember from history, it was quite a tumultuous year,” said Judy. “Martin Luther King had been assassinated earlier that year and Bobby Kennedy has just been killed. The Chicago Riots happened that year. It was a terrible year in history.”

It was also the year that the couple knew that they couldn’t live apart any longer.

Judy grew up mostly in Lansing (her family moved here when she was 9) and Karl grew up in Woodstock, IL. The two were in their mid-20s when they first met. Karl had attended college at Ohio Northern University and served in the U.S. National Guard. Judy had graduated from MacMurray College in Jacksonville, Illinois and had been teaching at T.F. North High School.

Karl’s sister and Judy had became friends in college and when Judy attended her friend’s college graduation, she met the whole family, which included Karl. Judy didn’t remember much about that first meeting because it was a large family gathering and there wasn’t any individual time together.

The second time she met him was when she went with her friend (and future sister-in-law) to the hospital to pick up Karl, who had been in a car accident and suffered a broken leg. After he got to know her a little, Karl said she had a fun personality and was easy to talk to. And the first thing  he noticed about her was her hair. “I was a redhead and she had dark hair,” he said.

Soon Judy and Karl’s sister became roommates. Karl’s sister had gotten a job in Lansing, giving Judy an opportunity to see Karl more. For their first date they took a drive up to Lake Geneva, Wisconsin, which is where Karl had worked in the summer, being not far from his hometown.

“We just spend time together,” said Karl. “We went out to dinner and I showed her around the area and we drove back home.”

After they had been dating for a while, Karl moved to Chicago Heights where he had found a job and they could finally be closer to one another. But in February of 1968, his company transferred him to Rockford, Illinois where the couple was again separated by a long drive. After just a few weeks apart, they decided they needed to be together for good.

“I think we just decided we’re better together than apart and when we were apart, we didn’t like it,” Karl explained.

Neither of them recall a formal proposal. “We just decided not to prolong it any longer. We wanted to be together,” said Karl. They talked about marriage and went together to pick out an engagement ring at a jewelry store at Woodmar Mall in Hammond. “We got engaged on April Fool’s Day and then got married in June,” said Judy. “I was teaching so we had to wait until the school year was over.”

They married in Rockford after that short engagement and settled there. Karl continued working for National Account Systems, a credit and collections business and Judy taught at Rockford East High School. They rented the basement in the home of an elderly widow who kind of became a stand-in grandfather to them. “We were very close to him,” Judy explained. “He was alone and his wife and had died and we’d go places together and watch television together and it was a great situation for us because we didn’t have any family there.”

Karl said they’d often sit and listen to that landlord tell stories about what life was like when he was younger. “He was about 75-years-old, which seemed so old then. But we’d just sit and have conversations with him and he was born in the 1800s. He saw things like the first automobiles,” Karl lamented. “Now here we are telling you stories.” Both Judy and Karl are 77.

The wedding took place at Court Street Methodist Church in Rockford with a reception immediately following at the church. They honeymooned at the Wagon Wheel Resort in Rockton, Illinois, a swanky getaway spot just north of Rockford near the Wisconsin border that had been visited by Bob Hope, Gene Autry and Ronald Reagan. After a few days there they went on to Fort Wayne to visit some of Karl’s relatives who weren’t able to make it to the wedding.

Life and children together

In 1971, the couple welcomed a daughter, Jenny, and the following spring they relocated to Lansing where Karl opened his own debt collection business and Judy did bookkeeping at home so she could care for Jenny. When her daughter started preschool, she attended Lansing Nursery School and Judy started working there. She continued working there for the next 30 years and ended up owning the school, first located in the First United Methodist Church and later moved inside of Lester Crawl School where at one time there were 400 preschoolers enrolled and 7 classrooms. In 1977, they welcomed a son, Brian.

Asked if there’s anything he’s do different during their marriage, Karl said he would have not worked jobs so far from home. For a long time he worked in the northwest suburbs and the commute meant that the kids were still in bed when he left and then in bed when he got home and he recognized the burden it put on Judy to be doing so much on her own.

There were a lot of ordinary days of doing everyday things, but with bits of romance sprinkled in here and there, like when Karl surprised Judy by upgrading to an engagement/wedding ring set with a larger stone and having her original rings set into a necklace.

As for advice for younger couples today, Judy said she’d encourage them to keep going and working at it. “Times are so different now with technology and some marriages may not work because people are so distracted,” she said. “Pay attention to your marriage and your children and what’s going on.”

Beyond raising two kids, they’re now happy to be grandparents to a grandson who lives here in Lansing and two granddaughters who don’t happen to live so close because their father, the couple’s son, Brian, is in the United States Air Force. Jenny followed in her mother’s footsteps and works as a teacher.

Fifty-one years is a long time and both Judy and Karl shared what they considered to be contributors to a long-lasting marriage. “I think our marriage has lasted because of our dedication to each other and our family,” she said. “It’s lasted because we’ve been working hard to stay together and take care of each other.”

Karl agreed. “She’s pretty much hit on it. It’s been a joint effort and a commitment of both of us taking care of each other and making sure that happened. It’s a daily, weekly, monthly, yearly effort,” he said. “You’ve got to be able to talk to each other and have conversations and communicate. It doesn’t seem like it’s been over 50 years.”