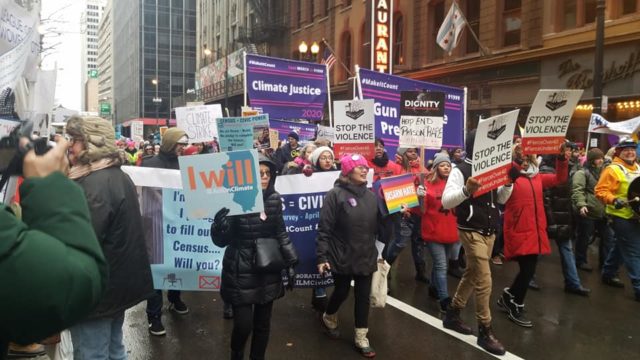 CHICAGO, Ill. (January 30, 2020) – For the fourth year in a row, thousands of protestors filled the streets of Chicago for the annual Women’s March on January 18, 2020. The yearly protest began in 2017, the day after President Donald Trump’s inauguration, in support of an array of issues, with women’s rights at the forefront. Millions of people across the country participated, making the 2017 Women’s March the largest single-day protest in American history.

This year’s march was focused on “direct action aimed at those who have attempted to impede on our rights” and did not include a formal rally like in years past. Among the thousands of people braving the cold and rain were several local women, including Dominique Newman, Erin Roeper, and Emilia Oldaker, all of whom have participated in past Women’s Marches. Newman, Roeper, and Oldaker are all members of the League of Women Voters Homewood-Flossmoor chapter.

Importance of the March

Newman, who first shared her march experience with The Lansing Journal in 2018, said there are several reasons why participating in the march is important, including the encouragement of seeing like-minded people banding together and the fact that it serves as a “tangible reminder to elected officials that there are a lot of citizens committed to being informed, holding them accountable, and refusing to be silent about injustices.”

“My attendance symbolizes my personal commitment that I won’t be complicit or silent when I witness people in power making decisions or policies that are unethical,” Newman said.

“Being involved in the march is now an annual event that raises consciousness about issues that affect all women nationwide,” Oldaker added. “There was no way of knowing that the 2016 election would cause unprecedented outcry, involvement, and organization among women all over the United States, but it has, and the march is certainly a symbol of continued devotion to the issues and values that I and millions of other people want to raise awareness of and devote energy to.”

Oldaker said she marches yearly to show her support not only for the movement but for organizations such as the League of Women Voters, Planned Parenthood, ACLU, Women Employed, Moms Demand Action, and Indivisible, among others.

While the Women’s March has certainly faced opposition, the general consensus among participants is that the tradition should be kept alive.

“[This year’s] experience was another totally positive one! I especially appreciated that participants encompassed such a diverse group of not only females of all ages and ethnic backgrounds, but also many men,” Roeper said. “I loved seeing so many creative signs. I especially appreciated seeing several mothers marching down the street carrying their babies. What commitment! Yes, I’ll be there next year.”

Both Newman and Oldaker agree that they plan on participating again in 2021. Oldaker describes her experience as “always positive” and she enjoyed the “unique and inspiring” format of this year’s march.

While Newman’s experience was equally positive, it was bittersweet at the same time. Newman is usually joined at marches by her daughter Jadyn, who went away to college this past fall: “I missed having my daughter march with me this year because she is away at college, but it was so meaningful to know she was marching with her friends in Washington, D.C. I’m so proud that taking her for the years when she was in high school has led her to feeling compelled to attend on her own, now that she is away at college,” Newman said.

Looking ahead to the future, Newman, Roeper, and Oldaker all agree that they would like to see increased local participation and emphasize the importance of staying informed.

“I would hope that more people than ever will commit to making democracy work in their communities,” Roeper said. She encourages residents to participate in the 2020 census, educate themselves on issues that impact the community, stay informed about the candidates running for office, and voting in both the March primaries and the November general election.

Oldaker said that since the 2016 election, she has seen “more involvement than I can even keep track of” in both the south suburban community and the Chicago area at large. Increased participation in activities such as postcard parties, candidate meet and greets, phone banking, and organizing rallies, vigils, and protests have been on the rise for the past three and a half years.

“It’s inspiring for me daily, and it’s not going to stop,” Oldaker said. “As people keep telling each other: this is not a moment—it’s a movement.”

Subscribe to our Daily News email for important local news about your neighbors, friends, and business associates—